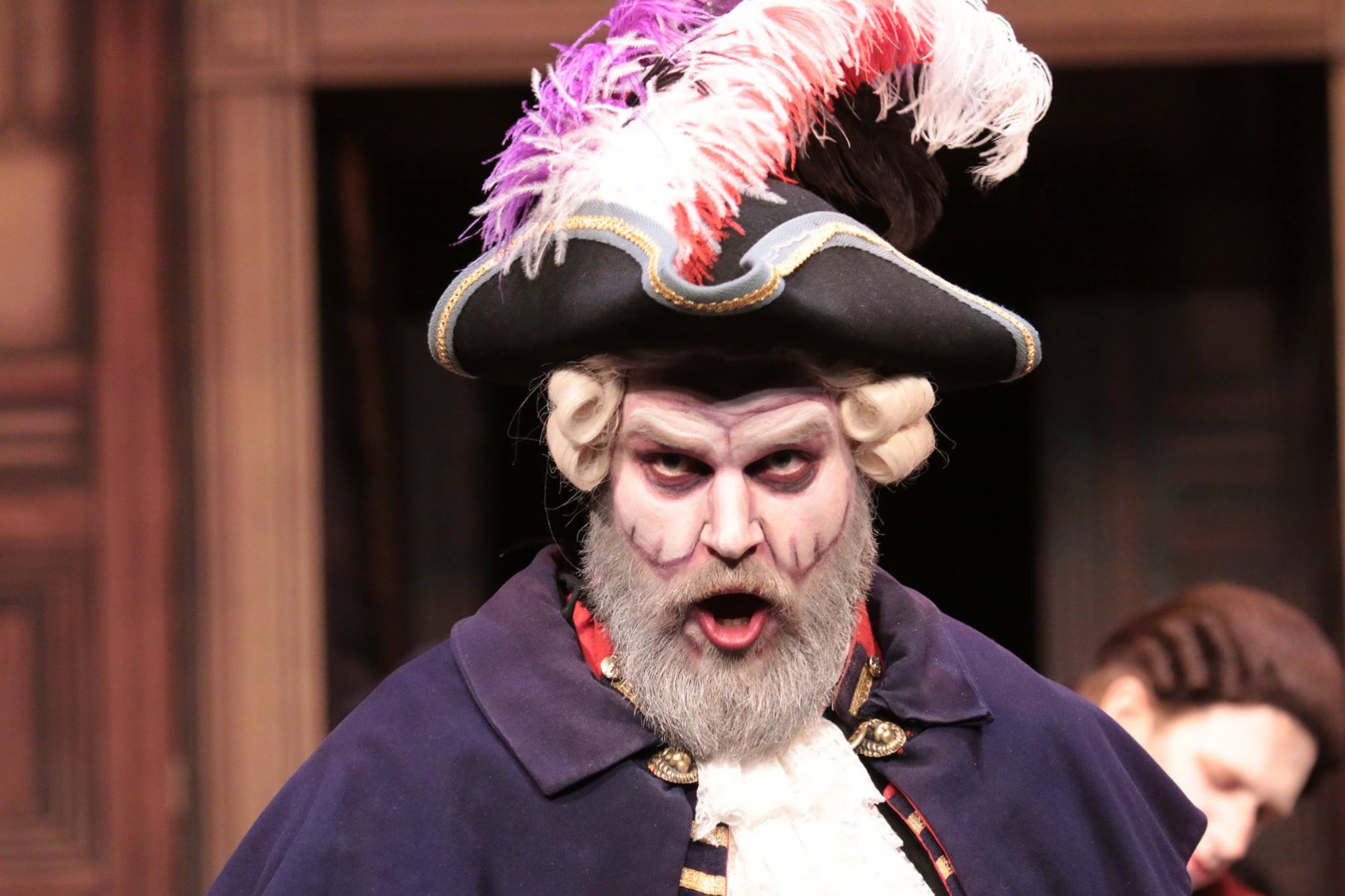 Do we have to live by the rules? Can we bend them, break them, ignore them altogether? And who makes them in the first place? Gilbert & Sullivan’s tenth operetta Ruddygore considers these questions as it tells a story even more bizarre than most of its predecessors. Maidens, madwomen, barons and bridesmaids, Ruddygore has got the lot – but while the play seeks to parody popular melodramas of its time (it was first performed in 1887), it subverts the genre to deliver a classic Savoy Opera happy ending.

Edinburgh’s Gilbert & Sullivan Society’s new production of Ruddygore at the King’s Theatre ably explores themes of right and wrong, self-righteousness and self-denial, whilst retaining the comic aspects of the plot to give everyone a good laugh. Rose Maybud (Gillian Robertson, who perfectly captures Rose’s fickle and sanctimonious nature – pretty she may be, but she’s one determined young lady) is the most eligible girl in the fishing village of Rederring (remember that name…) – ‘the only village in the world that possesses an endowed corps of professional bridesmaids who are bound to be on duty every day from ten to four’. The bridesmaids are desperate to sing at another wedding – they haven’t had one for six months – but there’s a problem. Rose is so obsessed with her book of etiquette that no-one is good enough to win her hand. Even the virtuous Robin Oakapple (Ian Lawson, who sashays seemlessly from saintly suitor to vexed villain and back again in the space of one evening) is a non-starter – she likes the look of him but he’s too shy to speak to her, and Rose’s guide dictates that she must not initiate the conversation; ‘here it says, in plainest print, “It’s most unladylike to hint”’ (If someone there chanced to be). Why does Rose need to adhere to these rules? Well partly because this is Victorian England, a time when a gentleman must never greet a lady in public unless she acknowledges him first, but a single woman must never address a gentleman without an introduction. Difficult, no? And Rose has what she sees as further justification; as a baby she was ‘Hung in a plated dish-cover to the knocker of the workhouse door, with naught that I could call mine own, save a change of baby-linen and a book of etiquette.’ No wonder Rose sees her book as ‘a voice from a parent’s tomb’. Robin Oakapple, however, is not all he seems to be. He is in fact the latest in a line of ‘bad barons of Ruddygore’ who, owing to the witch-hunting tendencies of their ancestor, are doomed to commit a crime a day or face a horrible death. Robin (aka Sir Ruthven Murgatroyd) has been in disguise for years in an attempt to avoid his fate – his younger brother Sir Despard (Simon G Boothroyd, excellent) has therefore been dumped with the baronetcy, and the criminal obligations. Robin has bent the rules, but now they’re catching up with him; his foster brother, the rather less virtuous but infinitely more entertaining Dick Dauntless (Chris Cotter, one of EDGAS’s shining stars, who this time shows us he can not only act, sing, flirt and assume an Irish accent but also dance the hornpipe – who knew?) is back from the sea – he’s got his eyes on Rose, and he has no qualms about giving away Robin’s secret to make sure he gets her. Rules, for Dick, are just one of life’s little obstacles. Despard’s evil doings, meanwhile, have driven Mad Margaret very mad indeed. In a performance worthy of Ophelia (but fortunately lacking Ophelia’s watery end) Fiona Main – another EDGAS treasure – brings us a woman first tragic then, once order has been restored, hilarious. And she’s another actor who can dance, witness her ‘blameless dance’ with Despard (We were the victims of circumstances).

EDGAS’s costumes are always outstanding, and from the bridesmaids’ stripy dresses to Mad Margaret’s rags and Despard’s quasi-vampire attire, Ruddygore is no exception – but in Act Two Wardrobe Mistress Liz Landsman and her assistants surpass themselves. In a scene somewhat derided by the operetta’s early audiences, the ghosts of various Murgatroyd ancestors step out of their portraits to quiz Robin (now reluctantly restored to his rightful status) on his crimes. Has he done enough? And were his deeds viciously evil or just a bit wet? (The latter of course – ‘Everybody makes a false tax return’) EDGAS wheels out its full complement of costumes here, with everything from clergymen to courtiers and knights in shining armour. Led by none other than Sir Roderic Murgatroyd (Farlane Whitty, an impressive figure with an impressive voice to match), the ghosts are none too taken with Robin’s attempts at bad behaviour. The wardrobe department has also made a good job of transforming Robin; once a respectable farmer, his hairdo now bears more resemblance to The Simpsons’ Sideshow Bob’s. Props are also well placed in this production. Mad Margaret’s Despard doll, which she clutches to her bosom as she wanders and worries, is, like her, both comic and poignant, while the variations on a wedding cake in the final scenes are slapstick at its best – simple and very funny.  Lighting is especially good; the sky turns blood red to herald Despard’s entrance, whilst the moment when the portraits come to life is cleverly covered by turning blinding floodlights onto the audience; when we next see the stage generations of bad barons have materialised. One of the early criticisms of Ruddygore was that the second act stretched the bounds of credibility too far, but this misses the point – that the story is a parody – and I think that this production opens with a clue as to how we are meant to take it. As the first curtain rises we see, shimmering before us, a picture of Rederring – it is a postcard of the seaside village, but it not ‘real’ – it is a projection that slowly fades before our very eyes. Like the plot, it is all a red herring/Rederring; there is no real village just as there are no real ghosts. This gives what follows an air of fantasy; we could almost be in Brigadoon country. The orchestra – superb throughout – gives us a second clue in its warm up, dropping the theme from Coronation Street into the more traditional introduction. As in soap operas, so in Savoy operettas; everyone changes partners, everything is an over-the-top drama and whatever happens, life goes on. Do we have to live by the rules? Most of the time we probably do. But sometimes we need to question those rules, to break free and take our chances. And in the world of Ruddygore, if not always in life, everything turns out well in the end.

As in every EDGAS production, all members of this cast make a real contribution to Ruddygore’s success. Artistic director Alan Borthwick and musical director David Lyle are to be congratulated on another excellent show. As part of its charitable remit, EDGAS is offering a wonderful chance to introduce children to the magic of opera, with bargain tickets at £7 (or £6 via a cast member) in the Upper Circle for the Saturday matinee performance of Ruddygore. The ticket price includes juice, biscuits and an activity pack.  This exclusive offer is available to children under 13 and up to 3 accompanying adults (there must be at least one responsible adult per 3 children). The afternoon will start at 2pm in the Upper Circle with a special children’s talk on the story, and a chance to meet some of the cast.  There will also be prizes for the best ghost & bridesmaid costumes. The show begins at 2.30pm, and will run with one interval until approximately 5.15pm.