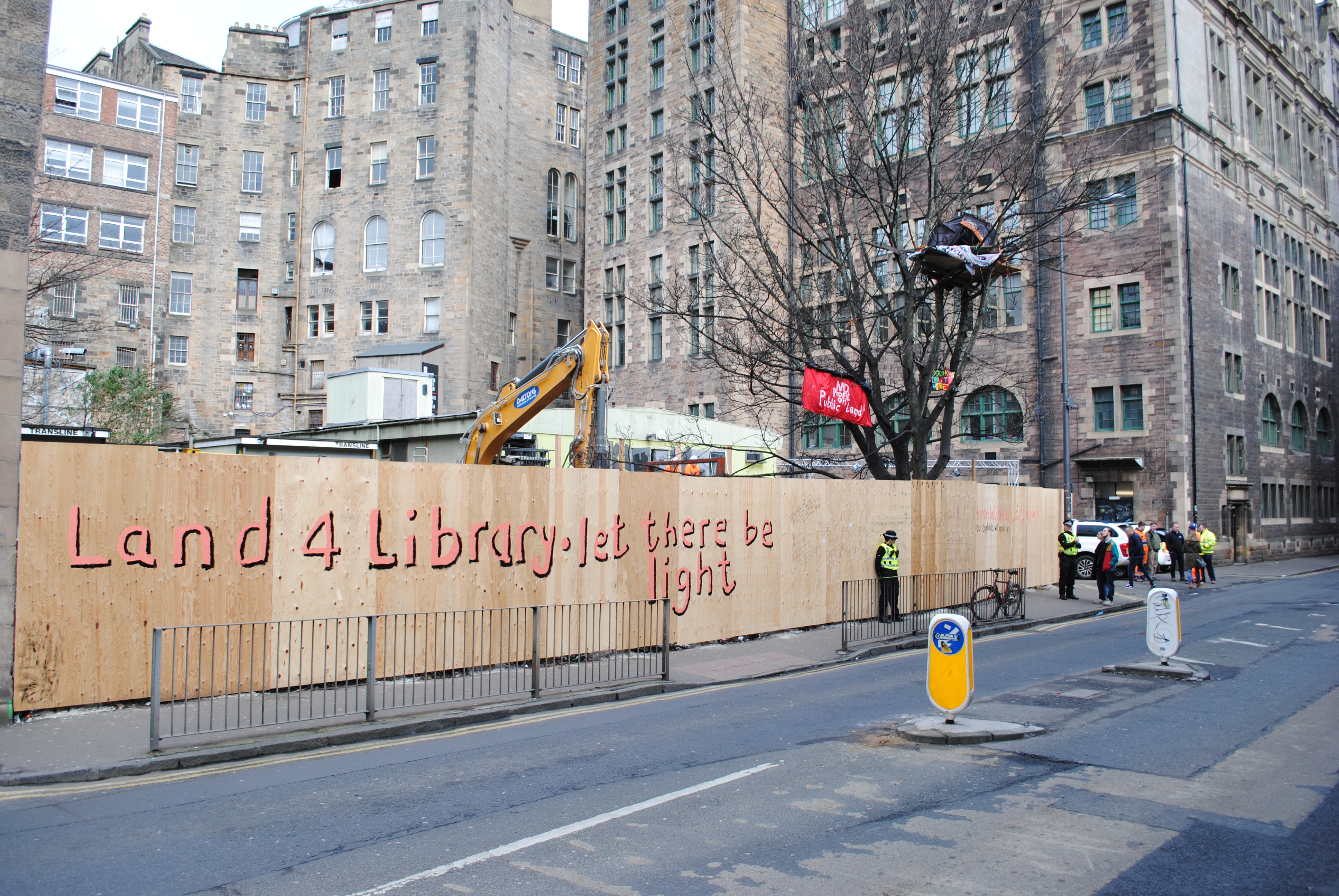 If Simon Byrom appeared fatigued at Edinburgh Sheriff Court this morning, then it was because he has spent just over a week living in a self-constructed treehouse, hanging from a branch from a firmly planted tree in Edinburgh’s Cowgate area.

Byrom, founder of the ‘Let There Be Light’ campaign, which takes its name from the motto of the Edinburgh Central Library, stressed the importance of the land to the locals of Edinburgh and their heritage. The public land was originally to be used for the extension of the Central Library, however Dreamvale Properties had acquired the space to build a city hotel.

Dreamvale had taken the hardy campaigner to court this morning to evict him from the tree.

Despite controversy over the planning permission granted to Dreamvale, they hold the title deeds to the property. Their argument that Byrom was breaking several health and safety laws by being on their property in a self-made structure added to their claim to evict Mr Byrom from the tree.

The Edinburgh Reporter heard only yesterday that Mr Byrom had been hanging upside down in the tree above the footpath, a possible danger to passing pedestrians.

Their main call was that Byrom should not be granted a term of notice before his eviction from the treehouse as his welfare would not be affected: Byrom is a permanent resident in Edinburgh’s Old Town, and his treehouse is not his main home.

Byrom replied: “Under the European Convention of Human Rights, article 6, I am entitled to a fair trial. The notice of legal action was given to me only four days ago. Literally nailed to the bottom of my tree. I had no time to logistically organise legal support or advice, and so I am here representing myself.

“The building of this hotel goes against the work and philanthropy of Andrew Carnegie, founder of the Central Library. The ‘Let There Be Light’ campaign is supported by locals, councillors, MPs and MSPs alike who do not want to see the ‘gentrification’ of our historic city.”

During his defence, he claimed his cause was supported by his social conscience and for the common good. He stressed he had never intimidated or abused police officers, fire wardens, or construction workers during his stay in the tree.

“Several local communities are affected by the controversial hotel development including the recent departure of ‘Access Edinburgh’ the homelessness medical clinic. Environmentally, this structure will add to the pollution already building in this small area”.

Sheriff McGowan, although sympathetic to Byrom’s claims, eventually ruled in favour of Dreamvale. He asked Mr Byrom if he had any legal entitlement to the land he had occupied in the tree. Byrom agreed he did not, however he again stated the social and moral causes for his occupation of the tree.

Sheriff McGowan eventually stated, “This is a court of legality, not morality.” and ruled in favour of the hotel developers.

Anne Duthie, friend to Byrom and supporter of the campaign, stressed the need for an environmental review, saying : “The hearings we had about permission to build on King’s Stables Road didn’t even have an environmental authority present. Environmental implications were the main objections to these buildings being constructed.” During the court hearing, Andrea, a friend of Byrom’s, kept vigil in the treehouse. He stayed there until the news of Simon’s defeat eventually brought him down to ground level. Just before he left, a postman approached Andrea, handing him a letter addressed ‘To the Man in the Tree, Cowgate, Edinburgh.”

Simon and Anne now want a Judicial Review of the planning permission given to Dreamvale by the City of Edinburgh Council.