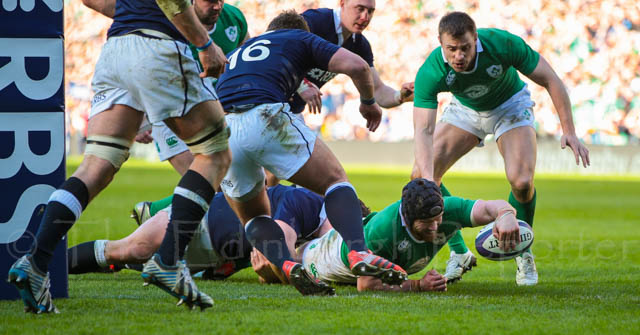 Vern Cotter leads Scotland into the Six Nations for the last time in a reign that has produced some heroic performances and a few stuttering ones along the way.

Scotland fans will remember the humbling to rugby minnows Italy as a low point in 2015, a game which registers to fans of Scottish Rugby on the embarrassment scale of rouge to a slightly darker shade of red.

Soon after that confidence-sapping Six Nations campaign in 2015, Scotland produced a glimmer of what everyone had been waiting for from this developing squad, an epic performance against the Aussies in a thrilling quarter final game at the 2015 World Cup.

Scotland’s form dipped again after the World Cup heroics with two defeats at the start of the Six Nations in 2016, but the defeat at home last year was a significant milestone.

The rematch/grudge match at Murrayfield in November against Australia was another memorable event, when Huw Jones emerged, a promising centre who made an astonishing start to his Scotland career.

Finn Russell and Johnny Gray shone in a performance that ended again in the narrowest of defeats, again at the death, again by the boot of Bernard Foley. Signs have been promising too for Scottish clubs, Glasgow Warriors have produced some fine performances on the European stage with the thumping of Leicester 45-3 in October last year as a stand out result.

Ireland come into the tournament as strong contenders for the Six Nations championship; their undoing of New Zealand in Chicago was a landmark game in world rugby, upending the southern hemisphere’s sense of dominance and superiority with an earth shattering performance from the Irish.
Stopping the colossal All Blacks in their tracks after an 18 game winning streak and ending 111 years of hurt is an achievement the boys in green can be seriously proud of.
But with Johnny Sexton, arguably the greatest fly half in Irish history, off the team sheet on Saturday, Scotland could have a real chance. Peter O’Mahony will also be missing due to injury.

Meanwhile Ireland sense a real opportunity this year, to seize the Six Nations from an injury hit England team who they will face at home in the final game of the tournament. All of this means we can expect a performance of the magnitude to which we have become accustomed  to from the Irish side.

Although Scotland’s backs coach Jason O’Halloran has sought to throw cold water over Scotland’s chances of repeating the 1999 teams Six Nations title winning form, many expect Scotland to produce another monster performance.
And with Sexton missing, and Scotland firing on all cylinders, this should be a great game.