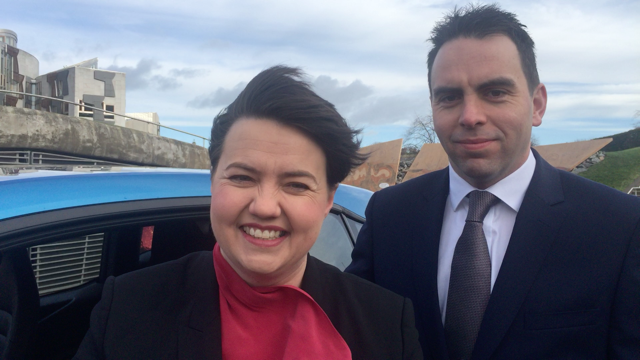 A series of new initiatives designed to protect Scotland’s environment and tackle climate change have been published today by the Scottish Conservatives in a major new policy paper.

Timed to mark Scottish Environment Week, the country’s main opposition party is setting out a range of new ideas in a bid to lead the debate on how we best reduce carbon emissions, protect Scotland’s natural resources and encourage sustainable growth.

Writing in the paper’s foreword, shadow environment secretary Maurice Golden warns that our natural resources cannot be consumed at the current “unsustainable” rate – and more work must be done by the Scottish Government to reduce our reliance on fossil fuels.

The paper also sets out new ways to ensure Scotland’s rich biodiversity and natural landscape is protected to the highest environmental standards – and to work with urban and rural communities to grow Scotland’s economy.

Had time for a quick chat with @RuthDavidsonMSP this morning on the Conservatives new Environment Paper pic.twitter.com/9nP3B6Yv12

Scottish Conservative leader Ruth Davidson said: “We are marking Scottish Environment Week.We’ve put together a paper with lots of different actions that we could take to make Scotland a happier healthier place. Each and every one of them on their own won’t be enough to change the planet but all together they could make a really big difference.”

The Tory leader had been out trying a new electric BMW when we met her and she reflected on her own car:”My car is about 6 or 7 years old now and it was second hand when I bought it, so it is probably due an upgrade! If some of the ideas we have in here like increasing the number of electric charging points, allowing electric vehicles to use bus and taxi lanes were put through it certainly might make me think again. I think it would make others think again too.”
Scottish Conservative shadow environment secretary Maurice Golden said: “It’s about taking global leadership on climate change. It’s about protecting our environment and also about growing our economy as part of that process. We need sustainability and we need to take leadership here in Scotland on climate change and that is something that this document will deliver.”

Davidson concluded: “This isn’t something that people would ordinarily associate with the Conservatives, really deep thinking when it comes to the environment but this shows that we’ve got strength and depth in our number.

“We’ve got people of real experience like Maurice who spent his entire working life before coming into Parliament in the environmental and business sector. ”

“There’s a lot in here and I hope that this is a jumping off point for all parties to have a discussion not just the Conservative Party.”