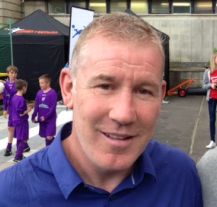 It’s amazing to think that 25-years have passed since Hibernian, ‘The Team That Wouldn’t Die’ overcame all odds to win the Skol League Cup after beating Dunfermline Athletic 2-0 at Hampden Park.

Trophies have always been a rarity in the capital over the years but this victory was even more remarkable considering that only a year before it looked likely that the club would no longer be in existence after a hostile takeover attempt from Heart of Midlothian’s chairman Wallace Mercer.

His plan was to sell Easter Road and Tynecastle with the new club playing at a purpose built stadium on the outskirts of the city and although Hibernian survived, thanks mainly to a campaign by supporters, performances on the pitch were still giving cause for concern, particularly when measured against their city rivals.

Things changed however in the summer of 1991, when the board gave manager Alex Miller the funds to buy a player who would quickly achieve legendary status amongst the Easter Road faithful.

Keith Wright was a lifelong Hibs’ fan who had been released by the club several years before. He eventually signed for Raith Rovers then Dundee where his partnership with Tommy Coyne brought him to the attention of bigger clubs.

He was linked with move to Aberdeen however when Hibernian expressed an interest, it was an easy decision for the striker and he put pen to paper for a reported £440,000 fee, a club record at the time.

It was money well spent as far as the Hibs’ fans were concerned and they were quickly proved correct.

Goals against Stirling Albion, Kilmarnock then Ayr United secured a semi-final against Rangers who, under Walter Smith had won their last five domestic trophies.

Few outside Leith gave Hibernian any chance however a first half header from Keith was enough to ensure a trip to the national stadium.

The following night, Dunfermline beat Airdrie at Tynecastle following a highly disputed penalty kick and the stage was set for an east coast final.

Dunfermline had a strong squad with experienced players such as David Moyes, Billy Davies and Andy Rhodes however Hibernian went into the game as firm favourites.

Neither club created any clear cut chances in a hard fought first half but the second period belonged to Hibernian. Four minutes after the restart winger Michael Weir was brought down inside the area and all eyes turned to referee Brian McGinlay who had famously rejected a clear cut penalty to deny the club a Scottish Cup win against Rangers in 1979.

On this occasion however he had no hesitation in pointing to the spot.

Centre half Tommy McIntyre calmly sent Rhodes the wrong way to the delight of the Hibs’ fans.

Hibs continued to dominate possession however with such a narrow lead everyone know that one mistake could end the dreams then in the 86th minute, Mickey Weir won the ball in midfield and slid an inch perfect through ball into Keith’s path.

As 40,377 supporters held their breath, the Hibernian striker coolly chipped the ball over the advancing Rhodes sparking wild celebrations amongst the Hibs’ fans and ensuring that the trophy would be heading to Leith for only the second time in the club’s history.

The aftermath celebrations throughout the capital will never be forgotten by the Hibs’ fans and to mark the anniversary, the players were invited to a Q&A at the Hibernian Supporters Club on Thursday 27th October then to the club’s game against St Mirren two days later.

Speaking to the Edinburgh Reporter, Keith recalled that historic cup run: “I had just joined the club and couldn’t have asked for a better start.

“Our league form had been good and we had a lot of confident but we went into the semi-final against Rangers as underdogs as they had some really good players such as Ally McCoist, Maurice Johnstone, Ian Durrant and Gary Stevens.

“Half way through the first half, Pat McGinlay sent a through ball and Mark McGraw clashed with Andy Goram at the edge of the box. The ball fell to Mickey Weir and the wee men sent a floating cross into the box. I expected to get clattered but the Rangers’ defenders both backed off which made it easy for me to split them.

“We defended really well and Budgie (John Burridge) made a couple of great saves.

“After beating Rangers we became big favourites to win the cup against Dunfermline. I remember coming out of the tunnel and seeing three quarters of the stadium full of Hibs’ fans which gave us all a massive boost and made us determined not to let the supporters down.

“People say that we weren’t at our best in the first half but Dunfermline were a decent team with plenty experienced players.

“We dominated the second half then when the wee man got the penalty Tam McIntyre was brilliant sending the keeper the wrong way.

“We were in control but at 1-0 anything can happen then near the end, Mickey sent the perfect through ball which left me one on one with Andy Rhodes.

“I normally didn’t like too much time to think and as I was running toward goal I was thinking that if I score then there was no way back for Dunfermline. I managed to clip the ball over the keeper and it was a brilliant feeling seeing it go into the net.

“That was the highlight of my football career. I was only 26 at the time and I’ll never forget the celebrations back in Edinburgh.

“The club had organised a function at the Dragonara Hotel, win or lose but first we travelled on an open topped bus from the Maybury to Easter Road. There were thousands on the streets and when we got to the stadium it was packed with cheering fans, five hours after the final whistle.

“We had a great night celebrating the victory but for me, my overriding emotion was one of relief, knowing that we hadn’t let the Hibs’ fans down.”

In 2012 Keith was inducted into the Hibernian Football Club Hall of Fame in recognition of his service to the club. He now works as an SFA Development Coach with Midlothian Council.