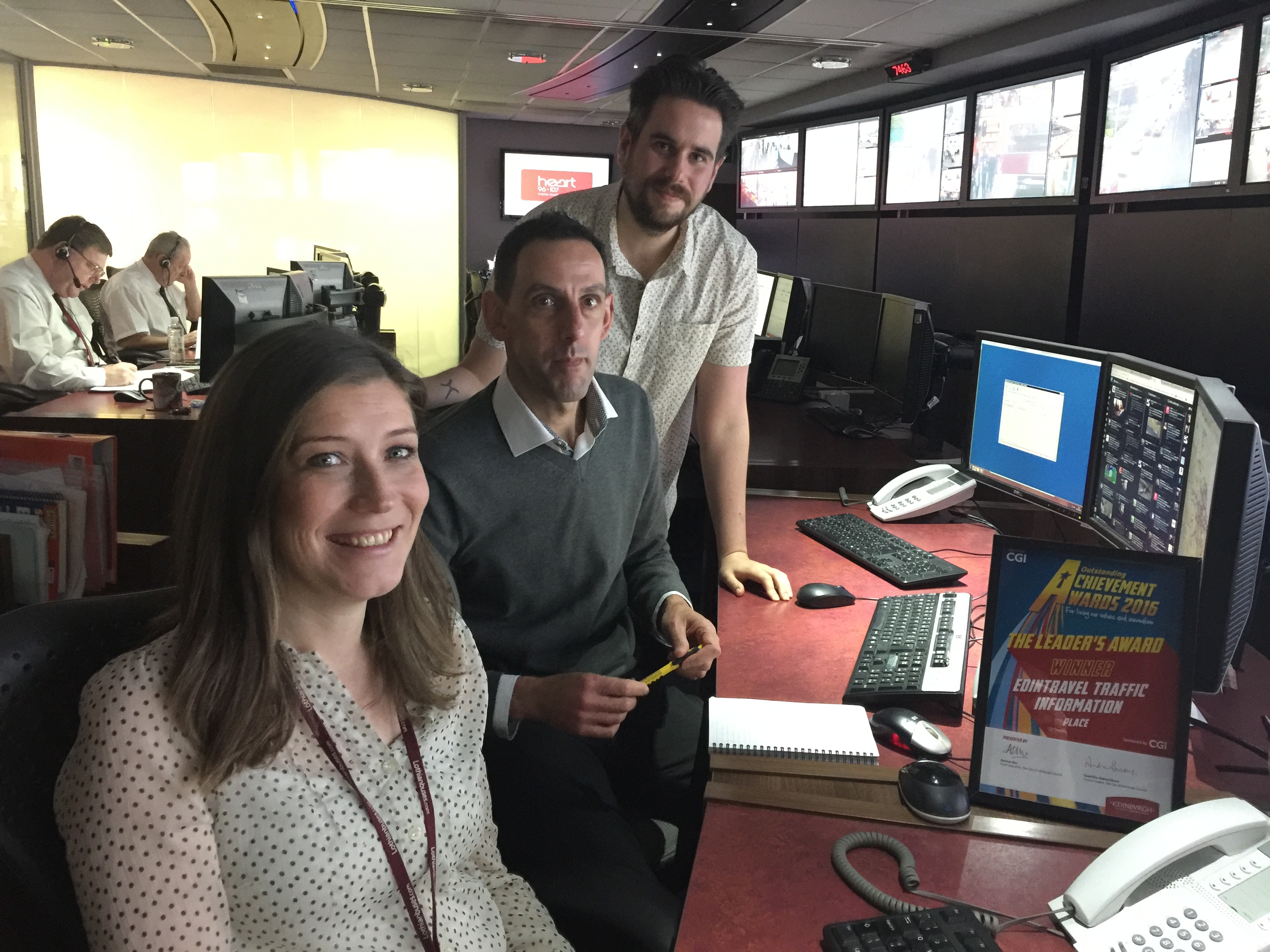 There are three people behind Edinburgh Travel News and in particular the Twitter account @EdinTravel which aims to give everybody in Edinburgh news about traffic hold-ups or hot spots. The service is run by the City of Edinburgh Council and I got to visit them yesterday to find out how it all works.

Naomi, Jon and Jack take turns to sit behind the desk in the control room at Lothian Buses’ Annandale Street depot. Here they monitor their own, and other Twitter accounts, on two or three screens while watching an amazing array of CCTV screens which cover most of the city. You can see a map of where the CCTV cameras are by clicking here.

They regard their job as a community information service, and hope that the information they regularly post online helps commuters and anyone trying to get around town. They regularly see the traffic dying down after about 6pm but at either end of the day there is always a big rush to get to work and then get home again, and that is when they are busiest.

At the recent council awards the Council Leader gave them The Leader’s Award for Outstanding Achievement which they have displayed proudly on the main desk.

With a forecast of snow possibly about to affect us by later this week @EdinTravel remember the snowstorm of 2010 when the buses actually stopped running owing to the snow around the city. Hopefully it won’t be as bad as that this weekend!

With the New Year celebrations coming up there will be road closures in the city centre and the Edinburgh Travel crew have already mapped these out for you :

They put out announcements about roadworks usually when they have got through the morning rush hour, getting the information from contractors and utilities as well as from the National Roadworks Register. It proves difficult to post this information in advance as work programmes change without notice and so it seems easiest to send out as soon as they can verify it.

The EdinTravel desk also get information from the Lothian Buses staff working in the same dimmed room alongside them who keep in touch with their bus drivers on radio.

The Lothian Buses staff know exactly what is going on with every bus in the city.  They were quick to alert @EdinTravel while I was there that there was an ambulance in front of a bus stop.  As it had an accompanying paramedic vehicle it could possibly pose a blockage for traffic which they should keep an eye on.

As well as the council travel section and Lothian Buses, a group of council safety officers control the CCTV cameras too. The safety officers appear to have preference over some of the cameras so if they get moved then the officers might move them back again quickly.

The trio are permitted to change messages on some of the electronic road signs around town, although the signs on motorways are the responsibility of Traffic Scotland. Naomi explained that she hails from the east of the city,  but having worked in this office for a while she now knows the city end to end – at least on camera!

The Twitter account will not be manned on 26 and 27 December and 2 and 3 January, but do keep in touch with them apart from on those dates. They also have a Facebook account which you can see here.

There is also an amount of information about roadworks on the council website here.

From Monday to Friday Edinburgh Travel News is manned from 7am till 7pm and you can help them by tweeting if you see anything they should know about on the city’s streets.