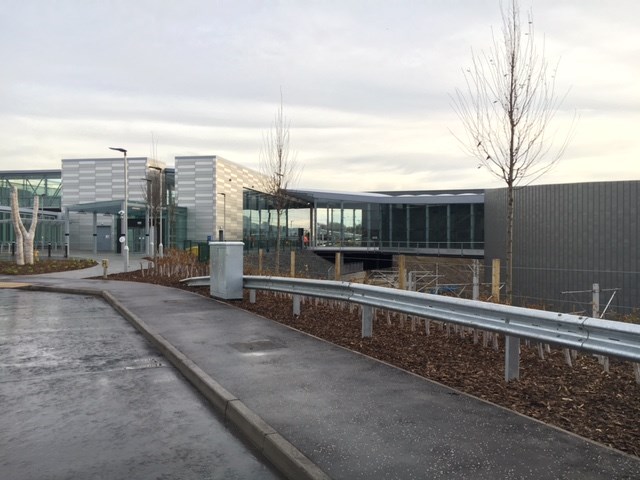 The new interchange station at Gogar is now open to the public. The aim is to integrate the tram line and railway services from Fife and the north so that passengers can access the airport by public transport. This has been accomplished by building a whole new railway station at Gogar beside the main road and near enough to the tramline that passengers can use both services.

Whether or not this station would have been necessary at all if a light railway option from the airport to the city centre had been taken up, is of course open to question. The tram was a council project, but the trains and the lines to serve them are the responsibility of Transport Scotland and The Scottish Government. Some believe that more joined up thinking might well have given Edinburgh a train link to the airport and the north more quickly than separate tram and train projects.

It is possible to walk or cycle from the Gyle Shopping Centre to the new station. The project is part of the Edinburgh-Glasgow Improvement Programme which will electrify railway lines across Scotland.

Edinburgh certainly now has more infrastructure for train and tram passengers in the west of the city . Fourteen trains will travel to Edinburgh Business Park either to Gateway or South Gyle between 7:00 and 9:00am with a similar number serving these stations in the evenings.

Transport Minister Humza Yousaf performed the official opening ceremony on Friday and said : I am delighted today to officially open the new Edinburgh Gateway station. This £41m investment will offer huge benefits to rail passengers travelling to or from the Gogar area, integrating the rail network with the tram network and providing a convenient link to Edinburgh Airport.”

Phil Verster, managing director of the ScotRail Alliance, said: “Scotland’s railway is undergoing its biggest transformation since Victorian times as we work with the government to deliver the stations, tracks and trains needed to provide more seats and more services for our customers.

“Edinburgh Gateway will help to transform the way people use our network and access Edinburgh’s trams and airport.”

As well as the improvements to the lines and stations, ScotRail says it is spending almost £500 million on new rains in the next seven years. This will mean that three quarters of the trains in Scotland will be brand new or newly refurbished.

The Transport Minister unveiled the first of the new trains yesterday: