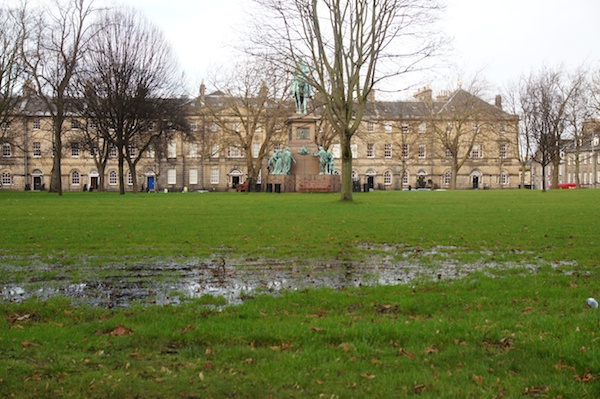 Hundreds of business leaders recently spent a night sleeping outside in central Edinburgh, Scotland, to raise funds for homeless people. They were joined by Olympic cyclist Chris Hoy and were served breakfast by the Scottish first minister, Nicola Sturgeon. Organised by sandwich chain and social business Social Bite, the aim was to raise half a million pounds for a “homeless village” on the outskirts of the city, where eco-friendly “tiny houses” will accommodate 20 homeless people.

The sleep-out prompted a welcome conversation about homelessness among business leaders, politicians and the public and brought together a wide coalition of people wanting to help. The appeal of initiatives like the homeless village that offer a practical solution to a very visible social problem is clear, especially at Christmas time, and the underlying message that we can end rough sleeping chimes with a movement in 150 cities worldwide. Since Social Bite is a young five-outlet chain with ambitions to expand, its Edinburgh village may be the first of many.

Good intentions are not enough, however: altruism must also be effective. People developing and supporting new homelessness interventions have an obligation to take account of lessons we’ve already learned from existing projects and research. Social Bite does so in several ways, but departs in one crucial respect.

Rough sleepers are extremely vulnerable. Many have previously experienced trauma, while levels of mental ill health and substance misuse are disproportionately high. For support to be effective it needs to be long term, persistent, flexible and co-ordinated. Innovative approaches must include intensive support provision, as the Social Bite village plans to.

When it comes to employment, homelessness initiatives need to focus on enabling people to access mainstream opportunities. Employment sometimes needs to wait until housing, mental health and addiction issues are stabilised, but with support many former rough sleepers will be able to work.

Employers need to be willing to recruit staff from these backgrounds, some of whom will have an offending history; and they need to offer them support, likely backed by specialist organisations. Social Bite’s cafes, which employ people who have been homeless and provide the necessary support, offer a welcome example of this approach.

Turning to places to stay, traditional hostels and other temporary accommodation have been concentrating homeless people together for decades, which can hinder recovery from poor mental health or addiction. The evidence increasingly suggests homeless people should instead be reintegrated into mainstream housing as quickly as possible. The idea of a homeless village seems in tension with this.

Two other lessons are worth emphasising. It is not clear how Edinburgh’s proposed homeless village stacks up against them, but those developing the model should make use of available research. First, interventions need to focus on people’s strengths and aspirations, not just their needs and problems. This underpins well evidenced recovery models for people with mental health and substance misuse problems and also those seeking to help former offenders avoid reoffending.

Also, poverty is a key underlying driver of homelessness. It needs to be addressed directly to ensure people don’t end up homeless again. This entails both individually tailored support and a systemic and political response to ensure the housing market, job market and welfare system work for people.

Several existing programmes embody these research-based principles. One is Housing First, developed in New York in the 1990s by homelessness support organisation Pathways to Housing. Unlike traditional models which require rough sleepers to navigate stages of transitional housing before “graduating” into mainstream accommodation, Housing First takes people directly from the street to mainstream permanent housing. Accommodation is in normal neighbourhoods rather than homelessness-specific schemes, backed by intensive long-term support to address issues that might risk the tenancy.

Housing First’s effectiveness is now very well established. It has been replicated in different parts of the US and also Canada, mainland Europe and the UK.

Another scheme is the Individual Placement and Support model of supported employment. Also developed in the US, it employs a similar approach to enabling people with complex needs to access and sustain work. It places, supports and trains people in ordinary employment settings – in contrast to the “train and place” approaches that still dominate many employability programmes. The model was originally aimed at people with severe mental health conditions but has been successfully adapted for people with drug or alcohol problems.

One final example is community hosting, where volunteer private households make spare rooms available to someone who might otherwise end up on the street. In the UK Nightstop offers short-term emergency accommodation, for example, while Supported Lodgings schemes offer placements of up to several years. Both host and guest receive support from specialist organisations.

Community hosting is most often used to help young people at risk of homelessness avoid more institutional accommodation that might hinder rather than help their transition to adulthood. Research has clearly demonstrated that this too achieves more positive outcomes than hostel-type accommodation.

Despite the good intentions of the Social Bite sleep-out and its success in raising awareness of homelessness, aspects of its proposal for a homeless village do not follow the same direction of travel as these other programmes. The context is that Westminster-led welfare reforms and council budget cuts since 2010 mean that people on already low incomes are increasingly struggling to meet the costs of housing. This makes it even more important that business leaders and politicians back evidence-based responses and that initiatives like Social Bite’s achieve the best possible outcomes for homeless people with the funds they raise.