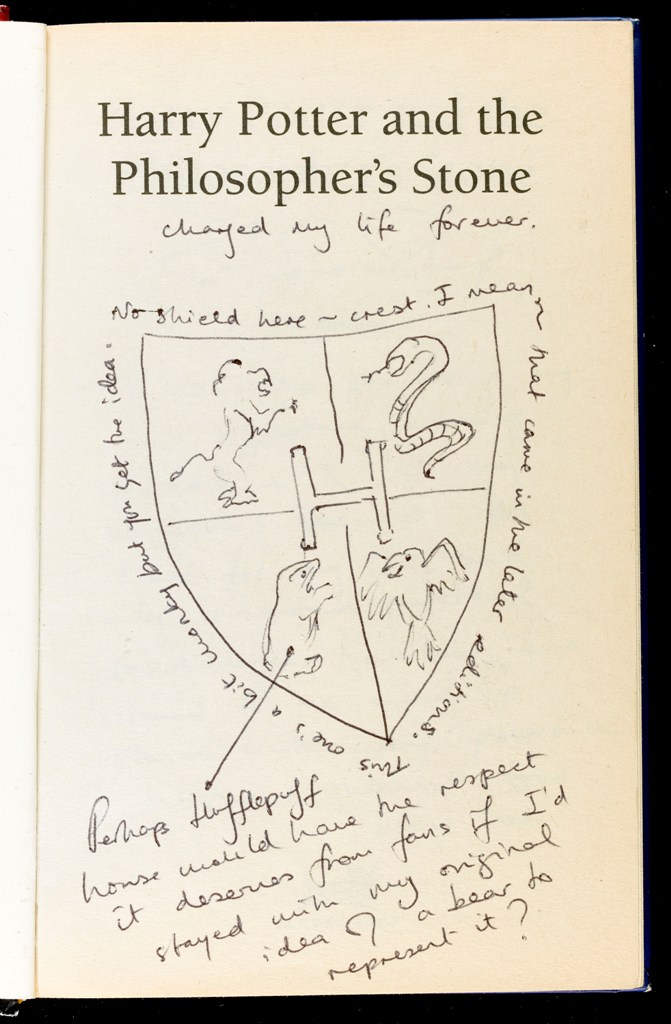 An exhibition which runs at the Writers’ Museum till 8 January will show off a rare first-edition of Harry Potter and the Philosopher’s Stone, featuring personal anecdotes and illustrations by author J.K. Rowling.

The original hardback book was annotated by J.K. Rowling in 2013 to raise money for English PEN and the author’s international charity, Lumos, which supports millions of children in orphanages around the world to return to family life.

It features 43 annotations, including 22 original drawings by the author, the book includes a sketch of baby Harry asleep on the doorstep of the Dursleys, the author’s thoughts on Quidditch and the Hogwarts Crest featuring a bear rather than a badger as the Hufflepuff house mascot.

Councillor Richard Lewis, Culture Convener at The City of Edinburgh Council, said: “This unique first edition features a remarkable glimpse into the Wizarding World of Harry Potter. In it, J.K. Rowling opens her heart about her characters and creations and makes beautiful illustrations of magical scenes from the series.

“It is a privilege to display this book by one of the world’s most popular authors in the city’s Writers’ Museum. The historic building houses rare books and items belonging to some of Scotland’s greatest ever writers and is the perfect place to display J.K. Rowling’s classic, annotated, book. We are thankful to the private lender, J.K. Rowling and the Scottish Book Trust for their generous support.”

A public programme of family events, featuring magic and music, art, animation and storytelling, will coincide with this exciting display. This programme is part-funded by the Scottish Book Trust.

Harry Potter at the Writers’ Museum will offer visitors the opportunity to see the one-of-a-kind book opened at different, annotated, pages on set days so that no two visits to this exhibition are the same.

Edinburgh is the world’s first UNESCO designated City of Literature and widely regarded as the home of Harry Potter. In 2008, J.K. Rowling was presented with the Edinburgh Award by the city’s Lord Provost. The award honours outstanding individuals who have made a positive impact on the city and gained national and international recognition for the Scottish Capital.

Discover the display at the Writers’ Museum for free until Sunday 8 January 2017.


It is only a year since the museum was refurbished :