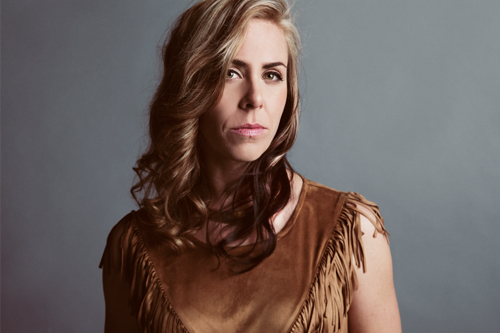 Amanda Rheaume is a quiet crusader. The Canadian singer-songwriter, who appears in the Traverse Theatre’s latest Monday music programme, has a history of speaking out for good causes in songs that use gentle persuasion and catchy melodies rather than a loud hailer to get her message across, and her method has produced results. As well as winning her a 2014 Canadian Folk Music Award for Aboriginal Songwriter of the Year and a nomination for a Juno – the Canadian equivalent of a Grammy – in the same year, her songs and soulful singing voice have raised awareness of breast cancer and raised money for people in need.

Rheaume, whose surname is pronounced Ray-oam, comes from a
Métis background. These are people of mixed European and indigenous ancestry and one of the three recognized aboriginal peoples in Canada.

It was after attending a rally for Cindy Gladhue, a sex worker whose alleged murderer was controversially acquitted, that Rheaume became aware that indigenous women’s lives were being lost on a large scale.

“I didn’t set out to write a protest song or a social commentary song,” says Rheaume. “Jim Bryson, who produced my latest album,
Holding Patterns, sent me a few lines he’d written and asked me to see what I could add to them, and two hours later Red Dress was finished.

“Cindy Glade had been found in a bathtub after an encounter with a client and her case struck me he as horrendous. But the murdered and missing indigenous women problem is massive and the song is a comment on how we blame victims rather than the perpetrators in these situations.”

Rheaume grew up in Ottawa and quickly developed a reputation
as a singer-songwriter who was more interested in being involved in the community than singing about her personal life. She has an aversion to love songs, she says, and inspired by a great aunt who wrote a book about it, she has drawn on her family history to bring the Métis people’s experiences to light.

She’s sung for Canadian troops in Afghanistan three times – to show that she supports the troops themselves rather than war – and raised money on tour for the families of military personnel.

Holding Patterns is her fourth album and although she was initially a lone operator as a writer she’s come to appreciate having someone to bounce ideas off.

“I’ll play a chord sequence or make a verbal note to myself into my phone or onto my computer and songs start that way,” says Rheaume. “But sometimes I get stuck and I like it when I get together with someone else and one of us has an idea that the other can take a bit further and then it goes back and forth like a conversation.”