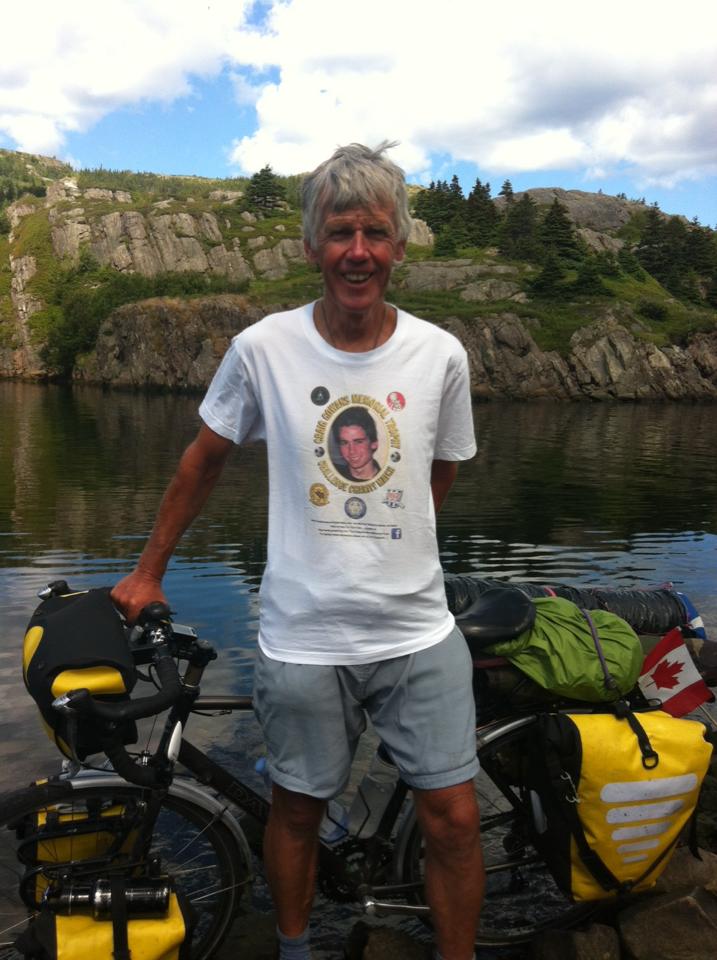 Remarkably the 64-year-old former police officer completed the journey alone and unsupported, with all the necessary equipment, camping gear and clothing being carried on his bike.

The trip was entirely self funded with every penny earned going to his chosen causes, namely  the Craig Gowans Memorial Fund which was set up in the memory of the young Falkirk footballer who was killed when a net catcher he was instructed to move during a training session struck an overhead cable. This fund is closely linked to the Sick Kids Friends Foundation

His other chosen charity was FACE, Fighting against Cancer in Edinburgh who aim to provide the “little things” that make a difference to patients and families who have been affected by cancer.

This was not Andrew’s first adventure however. In 2012 he cycled across America from the Pacific to the Atlantic in memory of his wife Aileen who tragically passed away in 2006, raising awareness of dementia (especially in younger people). The trip raised £7000 for his chosen charity, Alzheimer Scotland.

The following year he completed a two month cycle trip between Perth on the west coast of Australia and Brisbane on the east coast of Queensland which also raised much needed funds for charity.

After handing over the cheque, Andrew told The Edinburgh Reporter: “I had a wonderful time during my three months cycling across Canada, only having good experiences and nothing negative.  Luckily the weather was kind and I had very few periods cycling in the rain and even fewer against headwinds.

“I had the pleasure of meeting countless Canadians who extended huge amounts of unconditional warmth, kindness, generosity and hospitality.  Seeing three bears, several bald eagles, two wolves, a couple of moose, numerous beaver, the occasional snake and an otter, all in the wild, were the fauna highlights.   During the almost 6,000 miles from Vancouver to St John’s then onto Halifax, the scenery was spectacular and on many occasions breathtaking in its diversity.  Through the use of excellent tyres and maybe some luck, I had no punctures.  Overall, Canada is a truly wonderful country and I hope to return.

“I would wish to thank all those who generously donated to the fundraising effort which so far totals £2.973.75 including ‘gift aid’.  This money is split equally between Fighting Against Cancer Edinburgh (FACE) and the Craig Gowan’s Memorial Fund which is linked to the Sick Kids Friends Foundation (SKFF).  I know the charities concerned also extend their gratitude to those who donated. The money is very much appreciated and will be put to good use.
“I have no definite plans for future trips but with almost the whole world to choose from, I’m spoilt for choice.’
John McCaulay MBE from FACE ,who was a former police colleague of Andrew’s told us: “On behalf of everyone connected with FACE, I would like to thank Andrew for his generosity and congratulate him on his fantastic achievement. His efforts have not only raised well needed money for our charity but also raised our profile. The money raised will be spent on on-going projects at the hospital and also the annual Lapland trip where we take a number of children whose lives have been affected by cancer to meet Santa.”