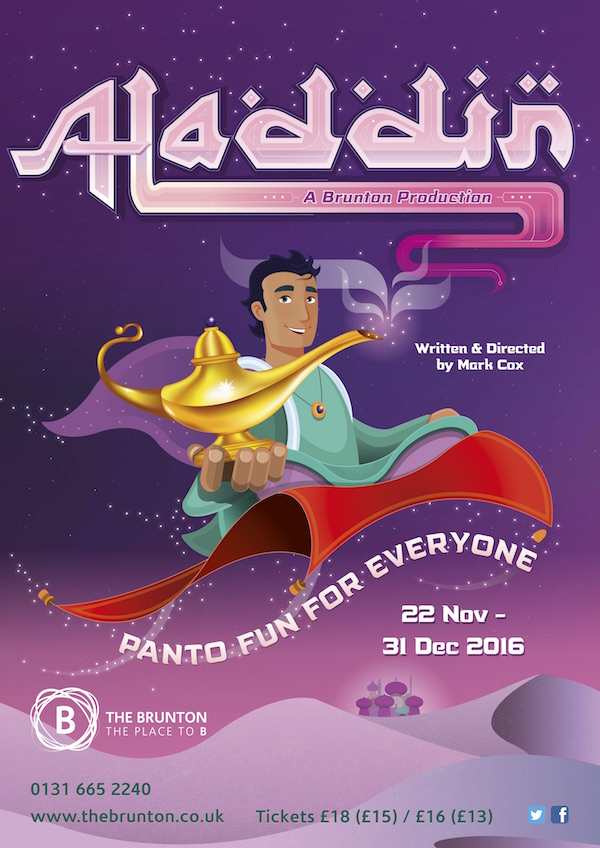 Rehearsals begin soon for Aladdin which opens at The Brunton, Musselburgh this November.

More than 100 young people from across East Lothian auditioned in August to take part as the chorus, with 27 recruited.

They join a professional cast which includes the return of a few familiar faces: Richard Conlon as Abanazar, who returns for his third Brunton panto; Sean Hay, as Emperor Malky, Princess Jasmine’s father and Jock the Genie; Shonagh Price as Rhona, a guard and Morag, Princess Jasmine’s pal; and Keith McLeish as Rory, a guard. Martin Murphy as Aladdin and Eilidh Weir as Princess Jasmine join the cast for their first appearance in a Brunton panto.

Aladdin sees the return of Mark Cox as writer and director for his third panto at The Brunton. Mark is perhaps best known to audiences as miserable pensioner Tam Mullen in BBC’s Still Game, currently screening on BBC One. He has worked extensively in theatre, TV and Radio and with his comedy partner Jane McCarry for Pipe Up, his corporate business.  Robin Peoples, well known for his fabulous theatrical creations including set design for The Singing Kettle, also returns to design set and costumes.

Aladdin is a festive treat full of fun and laughter with oodles of gags, local references, chart hits, outrageous costumes and shouting out! The Brunton specialises in producing fun and interactive traditional pantomimes that are suitable for all the family, from ages 4 to 104.

Aladdin runs from Tuesday 22 November until Saturday 31 December. Tickets are available from The Brunton on 0131 665 2240 or www.thebrunton.co.uk