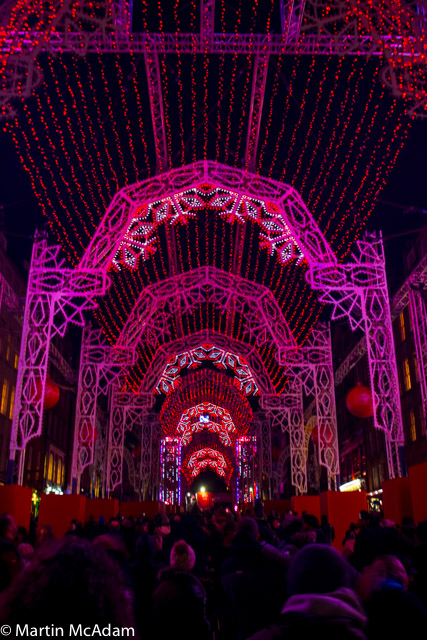 The Street of Light, which lit up the Royal Mile with 60,000 lightbulbs last December, is this year set to transform the west end of George Street with the bright glow of its twenty four luminous archways. Charlie Wood, Edinburgh’s Christmas said: “It’s no accident that Christmas in the northern hemisphere is celebrated at one of the darkest times of year. The dark nights are the best time to celebrate light and the warmth it brings. Last year we introduced Street of Light to Edinburgh’s Christmas to do just that and it was great to see the joy that it brought to the hundreds of thousands of people who came to see it.

This year, we’re hoping for an event better second album: in a new and bigger location, and for more dates, allowing for a larger audience and to spread the benefits to Edinburgh’s New Town.

We’ve a terrific line up of musicians to bring the street to life, including Tigerstyle whose bhangra will also celebrate Diwali, the Hindu festival of lights. We hope residents and visitors will snap up the opportunity to be at the heart of this world class sound and light spectacular.”

As well as the Street of Light, Edinburgh’s Christmas 2016 has been making a change from previous years by expanding the festivities elsewhere in the city.

The festival, organised by Underbelly for The City of Edinburgh Council, promises to “transform the city centre” and be the “biggest, brightest and best programme of events and entertainment across the city centre to date.” The usual annual events, such as the European Market in Princes Street Gardens and the Ice Rink in St Andrew Square will be as they have been in previous years.

But the Christmas festival will this year include a brand new site located in Festival Square, in front of the Sheraton Grand Hotel & Spa will be a pop-up Spiegeltent venue hosting a special Underbelly production of Broadway hit musical Five Guys Named Moe. Festival Square will also be part of a broader partnership between The Lyceum, The Usher Hall and the Traverse theatre called Christmas on Stage which will feature live music and theatre throughout the season, opening on November 18th.