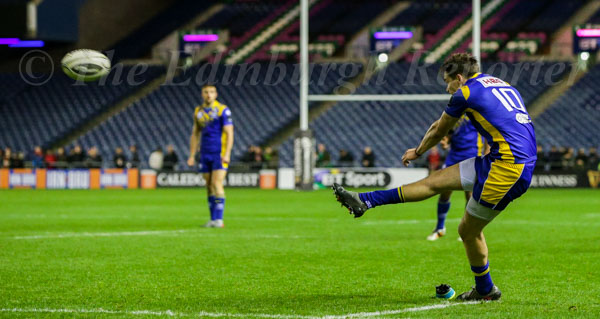 Perennial Italian strugglers, Zebre, seem to bring their A+ game whenever Edinburgh face them as the opposition and Friday night’s match at BT Murrayfield proved no exception.

A largely forgettable first half ended with the visitors 9-0 ahead through two penalties and a 40+ minute drop goal from the boot of stand-off, Carlo Canna.

The scores were fairly evenly spaced, coming in 3, 26 and 40 (and a bit) minutes. Edinburgh had a few chances, but the odd error coupled with a strong defence prevented the hosts getting near enough to the try line to worry the visitors.

Great things were expected of new signing, prop Felipe Arregui, but the Edinburgh scrum was under huge pressure the entire match, so only time may tell if he was a decent buy.

Edinburgh came out for the second half fighting and, for the first 10 minutes, or so, challenged the Italian defence. However, a couple of penalty awards soon had Zebre clear and, with 50 minutes on the clock, Canna slotted his fourth kick home for 12-0.

A couple of minutes later, he had another chance courtesy of one of the many ‘interesting’ decisions from the referee, Marius Mitrea, but missed.

The next ten minutes were fairly even – Edinburgh had a couple of near-line mauls pulled down, but they were only rewarded with another penalty – but as the clock passed 60 minutes, Edinburgh were on the attack again.

Yet another unpunished penalty inside the ‘red zone’ lead to an Edinburgh line out on the five metre line. Quick collect and maul saw Ross Ford at the back and the hooker then sneaked round the side to put the home side’s first points on the board. Blair Kinghorn then kicked a successful conversion for 12-7.

Another five minutes of dominant play by Edinburgh came to fruition with their second try. Coming through the centre of another close-in rolling maul, prop, Murray McCallum was the man who went over. This time it was Sam Hidalgo-Clyne who added the extras and, with around 11 minutes to play, Edinburgh were ahead for the first time at 14-12.

The sides then settle in for the final haul to the whistle with Edinburgh finally getting their scrum act together, but as the minutes ticked down, a missed touch-finder from Kinghorn gave Zebre the chance to run the ball back.

With three minutes left, they were being held out, but, eventually, they managed to pull the defence over allowing an overlap to develop down the left. Moving the ball quickly, Damien Hoyland was left facing the dilemma of two players with nobody in behind. He went for the intercept rather than the tackle, but missed the ball presenting No. 11, Giovanbattista Vendetti a clear run in. Canna stepped up, albeit slowly, to knock over the conversion and present Zebre with their get-out-of-jail-free card and a 19-14 lead.

And that’s how it finished. Great things were expected off the back of the previous match against Harlequins, but Zebre continue to prove a tough nut to crack for Edinburgh and the night saw them fail once again.