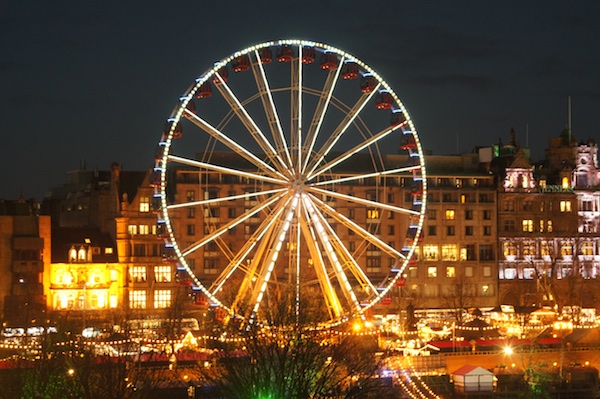 Callum Skinner who won both silver and gold medals at this year’s Olympics in Rio will switch on the city’s Christmas lights on Light Night.

This year Light Night will take place on 20 November. All the lights from the Christmas tree on the Mound to the lights on George Street will be switched on at the same time.

Callum will accompany the Lord Provost of the City of Edinburgh when an audience of around 20,000 is expected. He has chosen the international charity Jabulani Project to benefit from the fundraising element of Edinburgh’s Christmas. This was set up by Alex Wallace from James Gillespie’s High School in Durban.

This year Light Night will once again feature Radio Forth One DJ Arlene Stuart and there will be performances by the Edinburgh Festival Chorus, the RSNO chorus, Tigerstyle and other bands and choirs. The event is free.

Callum Skinner said: “2016 has been an incredible year for me winning gold and silver in the Olympics! I’m proud to be returning to start Edinburgh’s Christmas festivities in the city I grew up in and where I first discovered track cycling. Light Night is a terrific community celebration bringing everyone together in a free fun and spectacular event in the centre, it’s also a chance for me to highlight the great work that the Jabulani Project do for township children in South Africa. The charity is run by the popular former James Gillespie’s Head Teacher Alex Wallace. Many S6 students partake in an annual trip to support Gillespie’s partner schools in the Umlazi Township.”

The Lord Provost, Donald Wilson, said: “Who better to switch on Edinburgh’s Christmas lights than Callum Skinner? He’s had a phenomenal year winning gold and silver medals in the Olympic Games and has done his former school James Gillespies proud. I’m delighted such a great ambassador for the city and for sport will kick off the winter celebrations in Edinburgh. Light Night is the perfect way to bring everyone in the city together to get into the spirit of Christmas and this year’s switch on will show charity support for the incredible Jabulani Project.”

Charlie Wood and Ed Bartlam, Edinburgh’s Christmas, added: “Light Night is a wonderful moment when choirs from across the Edinburgh community take to the stage alongside Edinburgh Festival Chorus, the Royal Scottish National Orchestra Junior Chorus and Tigerstyle. It’s a community celebration that sits at the heart of Edinburgh’s Christmas. We’re delighted that Edinburgh’s Olympic gold and silver medal winner Callum Skinner will be joining Edinburgh’s Lord Provost and Forth Radio favourite Arlene Stuart to light up the city.”

This year Edinburgh’s Christmas celebrations expand into the West End for the first time to transform the city centre, stretching from Festival Square in the West End to George Street, St Andrew Square in the East End and of course East Princes Street Gardens.