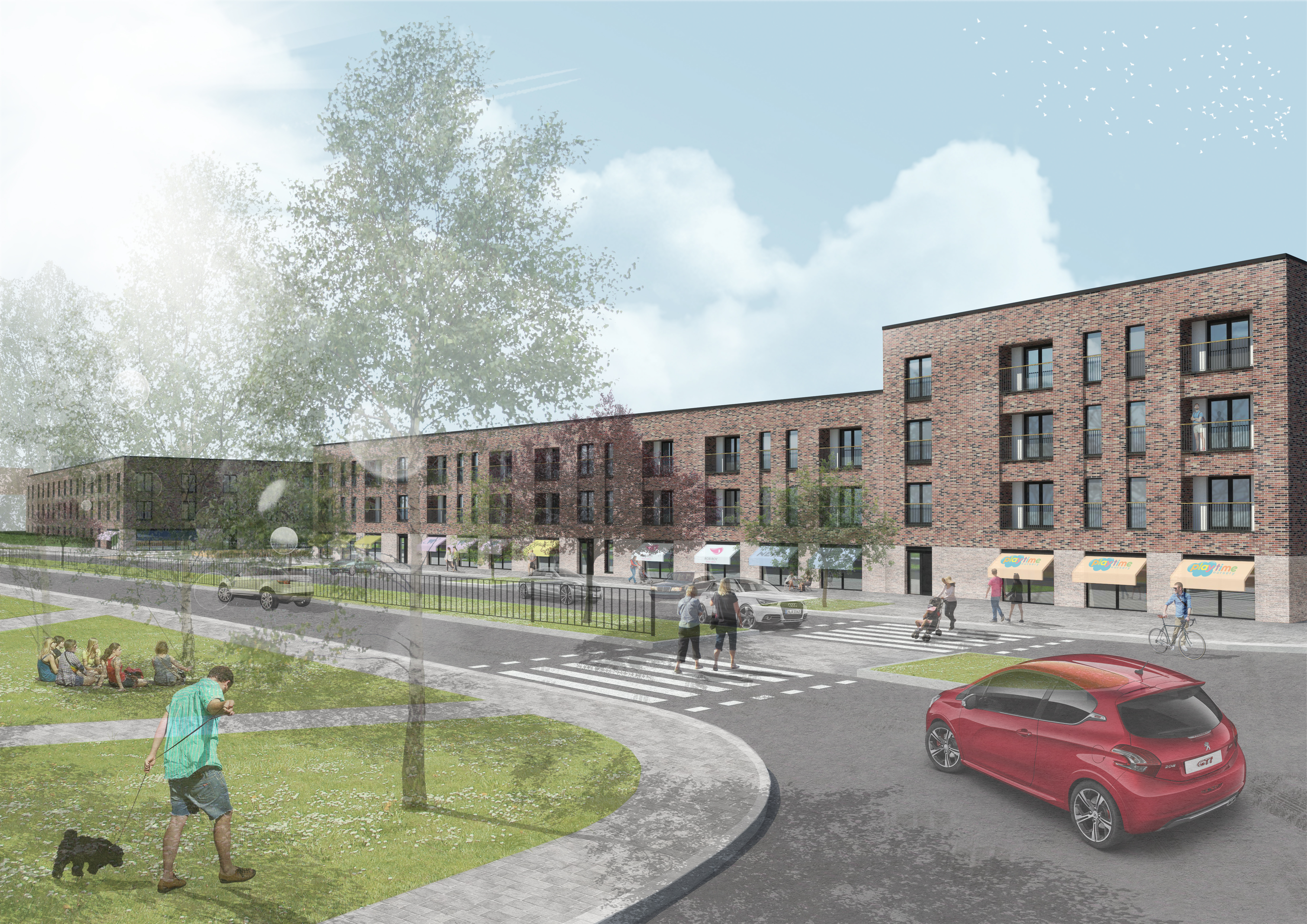 The shopping centre in Muirhouse will be torn down and the area redeveloped into a new town centre in a £26 million plan being put before the council next week.

Proposals for 160 energy efficient affordable homes, 13 shops, office space and public realm elements are all included in the scheme. 90 of the new homes will have lifts and communal meeting rooms making them ideal for older people to live in. The hope is that older people will then be able to live in their own homes for longer. It is well known that this approach is more cost effective, important in a city where the health and social care budgets are squeezed by more older people requiring care.

The council has been running a consultation which ends the day after the council meeting on 28 October. If you wish to have your say then click here to be taken to the council website. The council plan to instruct Willmott Dixon Construction Ltd using procurement with Scape Group Ltd to construct the new centre over the next four years in several phases.

The Scape Group offers a one stop shop for procurement and planning for public works of this type. On their website they explain : “We provide the fastest route to market available to the public sector, removing the need for clients to carry out their own procurement.”

Planning permission in principle was already approved in 2012, and the council bought the shopping centre in 2014 to allow for development of the area. At one stage the council took the doors off the shopping centre which made it more accessible, but it has now been decided that the only way forward is to replace it with something new.

Six former council houses will be bought back from the owners as part of the development, but 109 homes are expected to be built for rental by the council.

We have reported before about the new housing going up in Pennywell which has now won awards as a housing led regeneration scheme. Over 700 new homes have already been put up and Craigroyston Community High School was replaced in 2010. A new NHS partnership centre will also feature and the whole scheme will bring new homes for 2000 new residents and 180 staff over the next six to eight years.

Some funding (£1.52 million) has been released by The Scottish Government’s Regeneration Capital Grants Fund for the civic square and access to the arts centre and local services.

Housing Convener, Councillor Cammy Day, said: “The Pennywell development is Scotland’s largest housing-led regeneration scheme which captures what we’re aiming for across the city – a range of affordable, energy efficient homes that are completed to the highest standard.

“We know there is a strong desire within the Pennywell and Muirhouse community to see the area transformed into a new ‘civic heart’ for the existing, new and emerging population. These proposals for a new local centre and community hub will make the area an attractive place where people wish to live, work and play and will serve future generations.”

“The information on the consultation has been on display within the Community Shop for all to see.

“The current shopping centre is not fit for purpose and is in desperate need of money being spent on it.

“Many users of Muirhouse Community Shop have asked what does the future hold for our shop, currently we have on average 200+ residents accessing the shop per week and we would hope that the council provide us a space to continue to deliver what we do from here.

“It’s important that we do remember that this refurbishment is at the very early stages.”