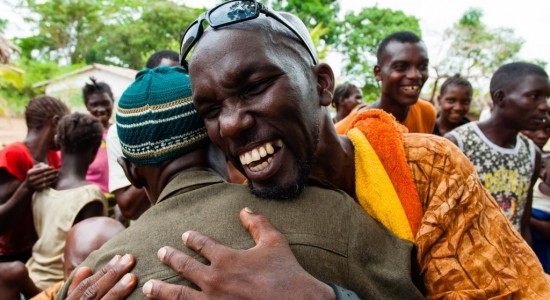 What does African film mean to you? Does it bring to mind Meryl Streep and her Kenyan farm? Virginia Anderson and her lion cub? Madagascar? Well think again. This year’s Africa in Motion Scotland African Film Festival (AiM) sets out to change your view of modern Africa. From documentaries to dance films, shorts to Shakespeare (Makibefo [Macbeth] – improvised by Antandroy fishermen), prostitutes to Purple Rain (transported to the Niger desert as Rain the Colour Blue with a Little Red in it/Akounak Tedalat Taha Tazoughai) this eye-opening celebration of African cinema showcases filmmaking talent from across a continent – one whose population is the youngest in the world.

This theme of this year’s festival (which takes place simultaneously in Edinburgh and Glasgow) is Time; the programme will explore past, present and future notions of Africa. Independência/Independence looks at Angola’s thirteen year struggle to free itself from Portuguese rule, while Egypt’s Modern Pharaohs: Nasser explores the history of the revolutionary army officer who, as president, defied the West during the 1956 Suez Crisis. Three films, Kalushi: The Story of Solomon Mahlangu, Nobody’s Died Laughing and Action Commandant focus on apartheid and post-apartheid activism. À Peine J’ouvre Les Yeux/As I Open My Eyes tells the story of a strong-willed Tunisian girl’s experience of the Arab Spring. The personal is, of course, also political, and AiM provides fascinating insights into the traditional culture and fading customs of rural communities. The festival’s opening film, Zin’naariya/The Wedding Ring, is the story of what happens when a wealthy student returns from France to her Songhay family in Niger; Nakom follows another student, this time one forced to return to his home village in Ghana after his father dies – should he stay there to fulfill his family obligations, or return to the city to continue his medical studies? Red Ochre – The Last Guards of the Holy Fire looks at the indigenous Himba tribe of Northern Namibia and the spiritual wealth of a 500 year old culture that will soon disappear. Music plays a huge part in African life. Jeffrey Levine-Hinte’s Soul Power documents the three-day concert that took place before Muhammad Ali and George Foreman’s famous Rumble in the Jungle fight – an event that brought together some of the most celebrated African and African American music acts of the time (James Brown, BB King, Miriam Makeba…)  Ethiopia is a country of eighty different languages – Roaring Abyss celebrates the story of the country and its music – historic, religious, tribal – and, of course, Ethiopia’s world famous jazz. In They Are We, filmmaker Emma Christopher helps an Afro-Cuban group (whose ancestors were transported long ago on a slave ship) in Perico to find its Sierra Leonian origins – and she does so, after years of trying, through song; ‘their lost but never forgotten family was coming home’. Whilst documenting and preserving the past, AiM does not shy away from the modern world. The controversial Zin Li Fik/Much Loved (screened at Cannes last year) is one of the first features to address the issues of sex workers in Morocco, revealing their exploitation by pimps, Saudi businessmen and a corrupt police force – but also showing the strength that the women gain from one another. No Land No Food No Life is an urgent call for an end to corporate land grabs, with personal stories from communities fighting to retain control of their land in Uganda, Mali and Cambodia. Many Sengalese women are working to survive in North African souks; Aji-Bi gives an intimate view of what it’s like to work as a hairdresser on the streets of Casablanca, and looks at problems of race and gender between African cultures. And what of Africans in Scotland? Olumide Fadeyibi’s The Champagne Room focuses on experiences of domestic violence, child abuse, human trafficking, forced marriages, immigration and drug crimes in Glasgow, following several interrelated stories around the city.

Short film has had a huge renaissance in recent years. On 31st October at Filmhouse AiM will screen the work of the finalists in its Short Film Competition, and on 1st November at Woodland Creatures, Leith Walk, you can see a collection of shorts from East Africa. The National Museum of Scotland will also host a discussion on mobile phone usage and its impact on filmmaking, with examples from a new wave of African filmmakers whose talent, creativity and hard work count for more than big budgets and industry connections.

And AiM does not stop at film! The programme includes discussions, talks, storytelling sessions, workshops in printmaking, screendancing and drumming, live music, an academic symposium (Havana-Dakar 1966), a Dine and View North African Feast at Serenity Café and a photography exhibition (African Cinema Behind the Scenes). The organisers are keen to branch out from the city centre too – on 30th October a pop-up festival in Musselburgh’s Fisherrow Centre will bring films and activities to East Lothian – there’ll even be an African Art Cafê providing Kenyan chai tea and cake!

So take a look at the AiM 2016 programme now – many screenings and events are free, others may be booked via the festival’s website here.

African in Motion Scotland African Film Festival will begin on 28th October and end on 6th November 2016; events will take place throughout the city. Programmes are available from Filmhouse and other venues, or see AiMs website and Facebook page for full details. AiM’s venue partners are Filmhouse, CCA and Glasgow Film/Theatre; its principal funder is Creative Scotland.