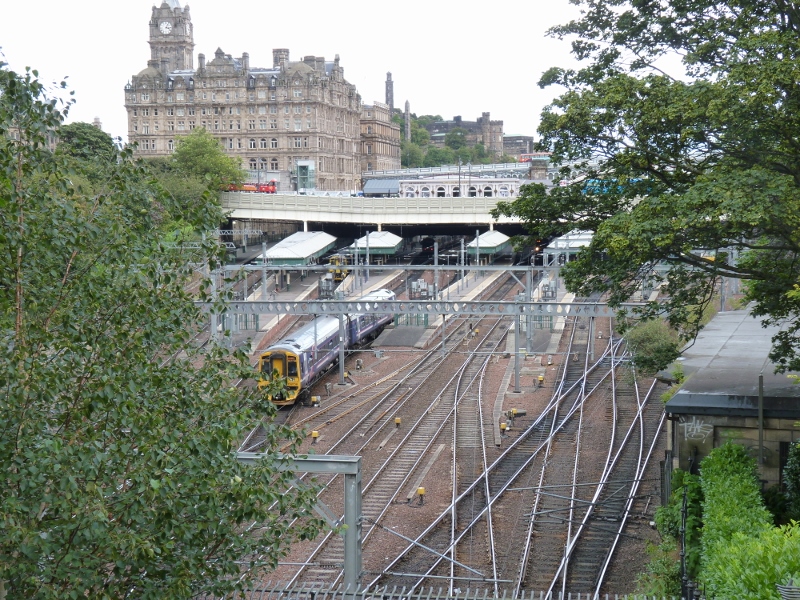 Oh dear, trouble on the railways.  We’ve just been told – by the newspapers of course – that Network Rail has managed to install overhead wires at the wrong height on parts of the electrified line between Edinburgh and Glasgow.  It means that much of the work will need to be re-done, along with altering the height of new bridge-walls to comply with safety regulations.  It’s estimated it will all push the project seven month behind schedule and at least £32m over its original budget of £742m.

The transport minister Humza Yousaf hadn’t much to say to parliament when it reassembled after the summer holidays, except that he would be putting Network Rail “through the mill” over the fiasco.

He did point out however that work on the Glasgow tunnel, which caused huge disruption to services at Queens Street Station earlier this year, was completed on time and on budget and the Borders Railway, now a year old, was also delivered by Network Rail on time and on budget.

However, the £175m project to improve the Aberdeen to Inverness line has also hit serious delays. It was supposed to start six months ago and is already reported to be well over budget.

This is presumably what the opposition parties mean by the SNP government “taking its eye off the ball” because of its “obsession” with a second referendum on independence.  So this week Nicola Sturgeon hit back with a detailed programme for government over the next year.  It includes a £500m Scottish Growth Scheme to get the economy going again.

The idea is that the Scottish Government will offer guarantees to companies to cover bank loans which they can then use to invest in new factories or products or housing developments or services. It sounds like a good idea but actually it falls into the usual politicians’ trap of believing that the economy is best stimulated by investment when the real driving force is demand. What’s the point in investing in new products if no one has the money to buy them ?

There is also an interesting trap here for the UK Treasury.  If it fails to approve the loan guarantees, the SNP will blame it for the failure of the scheme and for  continuing the discredited policy of “austerity.”

There are 13 other bills in the programme, including a welfare bill setting up Scotland’s new welfare system, a bill introducing targets on child poverty, a bill to cut air passenger duty, a bill to extend the scope of what constitutes domestic and child abuse and a bill to ban the use of wild animals in circus acts. Ms Sturgeon however could not resist mentioning a draft referendum bill on independence which she has in her locker. Thus she is holding a stick over Westminster’s Brexit negotiations – if Scotland doesn’t get a good Brexit deal (ie staying in the single market) then there could be a second vote on independence and the end of the United Kingdom.

Another bone of contention between the SNP Government and Westminster has been the Dungavel detention centre for failed asylum seekers. On Thursday the Home Office in London announced that it is to close the centre next year and replace it with a smaller unit at Glasgow Airport.

Dungavel, an old hunting lodge in Lanarkshire, has attracted many protests outside its barbed wire fences against the treatment of detainees. Some have been kept imprisoned for over a year, including children, while they await appeals against deportation.  Dungavel has become a symbol of the different attitude to immigration north and south of the border and its closure has been welcomed by the Scottish Communities Minister Angela Constance.  But she says she’s seeking “urgent clarification” about how asylum seekers are to be treated in future.

This week we learned that Scotland could well have been “discovered” in the 17th century by Inuit people from Greenland. Two adventurous Englishmen, Olly Hicks and George Bullard, landed at Balnakeil Bay near Durness on Sunday after paddling 1200 miles in their two-man kayak across the freezing waters of the North Atlantic from Greenland.

The journey took them nearly six weeks, making their way first to Iceland, then to the Faroe Islands, then North Rona and finally to the Scottish mainland. They were seeking to prove that the mysterious “Finnmen” seen off Orkney in the 1600s were not from Finland but were Inuit explorers from Greenland.

Finally, can I send my best wishes to Scotland’s Paralympians (33 of them) who have left the heatwave we’ve been having here for the even hotter conditions of the Games in Rio. We should congratulate them not on their crude medal haul but on the achievement of making it to the Olympic Games at all.