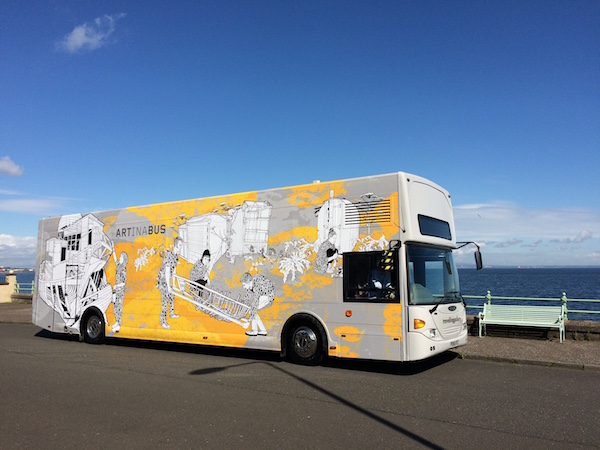 As part of Edinburgh Art Festival (EAF) a new exhibition is being unveiled at the Travelling Gallery. This is being staged in partnership with New Media Scotland for both the Festival of Architecture and EAF.

Supported by the City of Edinburgh Council, Creative Scotland and the Esmée Fairbairn Foundation, the Travelling Gallery ‘art on a bus’ will this month feature Alt-w: Blush Response.

Focusing on artists who make use of technology and the role digital interaction can have in our lives, the Alt-w: Blush Response exhibition will feature intricately animated paper models by Charles Young, each only a centimetre high; virtual reality headsets exploring Brutalist Architecture by Dennis and Debbie Club; Torsten Lauschmann collaborating with the Bothy Project and an interactive drawing following the map of Crinan Canal by ~in the fields.

Each newly commissioned artwork will have two interrelating elements – a smaller work to suit the unique Travelling Gallery space and a larger work to be installed at a specific location in Scotland. During its tour, the Travelling Gallery will visit the locations of larger artworks resulting in the two elements ‘blushing’ in response to each other.

It will visit the following venues in Edinburgh before undertaking an Autumn tour of Shetland (with the support of Northlink Ferries), Lewis & Harris, Dundee, Renfrewshire, Glasgow and Moray:

Everyone is welcome and admission is free.

“It is fantastic to see different elements of Edinburgh’s festivals weaved together and after its launch in Edinburgh, Alt-W: Blush Response will travel right across Scotland. If you’re near George Street, Leith or Portobello, make sure you pop in.”