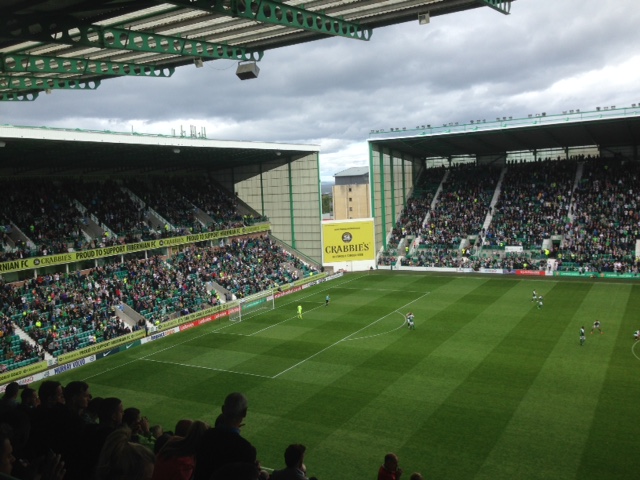 Neil Lennon’s first home league game ended with a 2-1 victory over Dunfermline at Easter Road this afternoon, leaving the club in second place in the Ladbrokes Championship behind Raith Rovers on goal difference.

A crowd of almost 16,500 watched the game, the largest attendance of the day in Scotland and Lennon went with the same starting XI that lost to Queen of the South on Tuesday night although there was a change on the bench as Dylan McGeouch returned from injury.

Hibs dominated possession and took a deserved lead seven minutes later. Darren McGregor’s header from James Keatings’ corner was cleared off the line. Paul Hanlon headed the ball into the danger area and Ben Richards-Everton deflected the ball into his own net under pressure from Grant Holt.

Hibs then had a sustained period of pressure but were unable to add to their lead.

John McGinn fired a sensational drive from 30 yards which looked to be heading to the top corner before Hutton managed to tip the ball over the bar, then Holt had an effort cleared off the line. Hanlon went close with a header and another long range strike from McGinn was deflected inches wide.

In the 39th minute, a looping header from Cummings came back off the post and unbelievably Hibs went in at the break only one goal to the good.

In the 51st minute, both sets of fans took part in a minute’s applause in memory of Hibs’ fan Ali Tait who sadly passe away in Atlanta last week.

Keatings almost added a second with a curling effort from the edge of the area before Dunfermline equalised against the run of play,

Joe Cardle picked up the ball in midfield and cleverly slid it through to on-loan Hearts’ striker Gavin Reilly who calmly dispatched the ball past Ross Laidlaw to the delight of the large travelling support.

Dunfermline looked the more likely to score before Lennon made two substitutions. Martin Boyle replaced Holt then McGeouch replaced Liam Fontaine, and both subs were involved in the winner.

McGeouch picked up the ball in midfield and slid an inch perfect through ball to Boyle who cut the ball across the face of the goal. Richards-Everton was unable to clear the ball which fell to Cummings and the striker slid the ball past Hutton from four yards.

In the dying minutes, Kallum Higginbotham was booked for a late challenge on Lewis Stevenson in front of the home dugout.

After the game Lennon said: ” We dominated the game for long periods and could have been 2-3 up at half time. That’s two wins out of two so we’ve got to be pleased with that.”