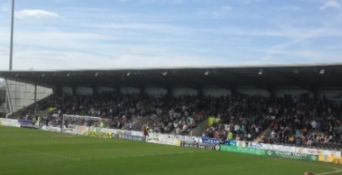 Hibs made it three wins out of three this afternoon as a Jason Cummings’ first half double secured all three points for Neil Lennon’s side.

Head Coach Lennon made one change to the starting XI that beat Dunfermline 2-1 last weekend with Liam Fontaine making way for Dylan McGeouch as Hibs returned to the more traditional 4-4-2 formation.

Grant Holt and John McGinn both had chances before on-form Cummings gave Hibs the lead midway through the first half.

David Gray did well down the right wing before his cross was deflected into the six yard box and Cummings  was on hand to slot the ball into the net from close range.

Stephen Mallan who was linked with Hibs a few weeks ago went close with a 30 yard  before a mistake in the Saints’ defence allowed Cummings to make it 2-0 from a tight angle.

Moments later and the lead was double as calamitous defending offered Cummings a chance on a plate.

James Keatings then went close before  from long range before Gallacher did well to prevent Cummings grabbing a hat-trick.

The St Mirren goalkeeper then produced a great double-save as Cummings attempted to dink the ball over him and saving Holt’s effort from the rebound.

McGinn almost made it 3-0 just before the break as Hibs went in having totally dominated the game.

New signing Andrew Shinnie made his debut, coming on for Keatings in the 68th minute, and fellow debutant Brian Graham came on in place of Holt eight minutes later.

Both players had chances to open their account with Hibs but neither succeeded.

Just before the end, McGinn struck the underside of the bar from 20 yards out nd Hibs held on to secure the three points.

The victory ensured that Hibs have started the league campaign with three consecutive victories for the first time in over 40 years, leaving the side joint-top of the league with Raith Rovers.