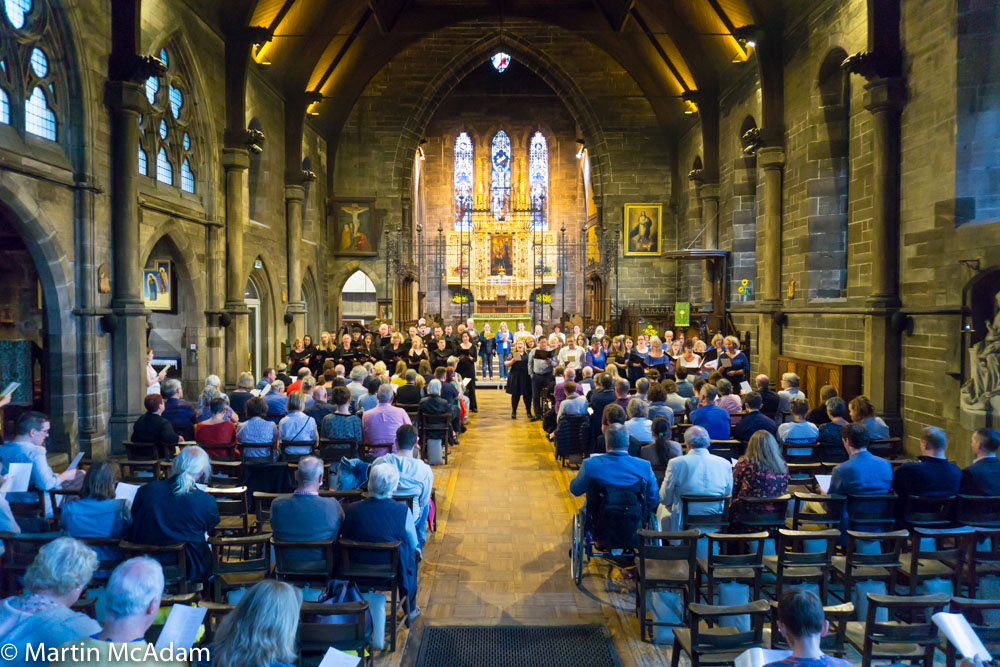 Songlines criss-crosses Edinburgh for a unique celebration of singing

Today the Edinburgh International Festival staged  Songlines, a free participatory event at venues across the Lothians celebrating the joy of singing.

A city-wide event took place earlier today and culminated in a 9 location singsong of Wild Mountain Thyme at 4.50pm.

We spoke to Fergus Linehan at Old Saint Paul’s Episcopal Church ahead of the #Songlines event there this afternoon pic.twitter.com/nl6oxtEsTG

Songlines was led by performances from the choirs, with song-sheets also available for audiences to join in with some of the pieces.

The end of the second session at 4.50pm offered a moment for the choirs and audiences across all respective locations to join together to sing the Celtic traditional Wild Mountain Thyme, making for a city-wide singalong of this much-loved ballad.

The full repertoire of songs ranged from classical to rock, featuring works including Strauss’ Morgen and Elbow’s modern torch-song One Day Like This, alongside folk and Scots traditional songs. Fergus Linehan, International Festival Director said: ‘The International Festival has been entertaining audiences in our city centre for many years, taking over Edinburgh’s established venues, but events like Songlines give us a great opportunity to reach  communities which are farther away and to share the Festival experience with a wider audience. It was fantastic to see so many singers join together across the city and beyond’.

Sally Hobson, Head of Creative Learning at the International Festival said: ‘Songlines gave us a wonderful opportunity to work with Edinburgh’s extraordinarily rich seam of community singing. The moment at the end of the day when everyone at all of the venues joined together in singing Wild Mountain Thyme was really special – and conveyed exactly what we wanted this event to be all about’.

The name Songlines is inspired by the Indigenous Australian tradition of passing on sacred stories as large song cycles, which maintain a living link between land and people. Singing is an integral and essential part of our lives – whether on a football terrace, in a concert hall or simply in the shower – singing has guided, soothed and filled peoples lives and communities for centuries.

This is the second year that the International Festival includes performances from local community groups. In 2015 the community brass band project Fanfare drew audiences to locations along the Water of Leith in a celebration of popular music and amateur performance.

Events like these enable the International Festival to move beyond its city centre home into areas and communities across and around Edinburgh. The International Festival’s community engagement and creative learning programmes operate both during August and around the year, building audiences and partnerships for the future and expanding its reach into local communities.