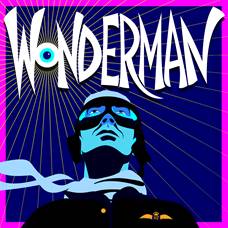 Awakening in an Alexandria hospital bed after a near fatal Spitfire crash, the young Roald Dahl embarks on an ensemble of lurid, surreal nightmare episodes that we soon begin to realise are the gestating crucible for his future short stories.

With piano, bass, drums and occasional strings we encounter, through burlesque, Dahlesque grotesque musical vignettes the genius troubling muses that venomously serpentine through his post traumatic imaginations. Surreal parallel narratives bubble within and without his subconscious.

This show has a naughtily daring frisson. Like the classroom paper aeroplanes he darts about his hospital bed we share his flights of fanciful fractured imaginings.

Wonderman is a valiant valediction to a master words-wizard – it growls with furtive, anarchic daring and bubbles with frobscottle pungency.

The musicianship slides between the aural synapsids like your Nan’s upside-down pudding steeped in Ecstasy. The derring-do tech crew will surely be commanding the next landing of an Eco-smiley tumble dryer on Halley’s Comet.

In conclusion, or is that concussion (have you already read his short story, ‘Lamb To The Slaughter?) you will be both laughing and gaping in fascinated earnest.

Wonderman will be the death of you if have the appetite for that sort of macabre machination. It is Dahl’s 100th birthday anniversary and we are being bombarded with BFG bus banners. Now where is that frozen leg of lamb just when you need it?