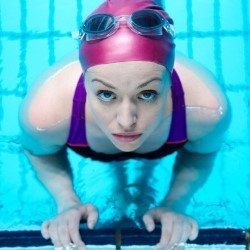 She watched the television images of the unfolding aftermath of the Christchurch, NZ earthquake where many Irish émigrés had settled. She susequently returned to Dublin where she resolved to explore these events with in her own existence and as an extended metaphor of how events both impact on our lives and how we deal with the choices they confronted us with.

Orla Murphy said: ‘The fact that the New Zealand aftershock was worse than the main event seemed to have clear parallels with the situation in Ireland. An image came into my head of a woman, swimming as if her life depended on it and I wondered – what if it did?’

Protagonist Maeve is spurred on by ‘swimaholic’ Doreen to seek closure with unsolved issues with her much-loved father back home. In this elemental battle for literal and metaphorical survival, will Maeve swim free from the ties that bind her to the past or is she just floundering from the Scylla to be swallowed by the Charybdis?

Wowing the highly prestigious Tiger Dublin Fringe Awards in 2015 (savour the Tiger irony there!) this visit to The Fringe marks Remember To Breathe’s UK premier.