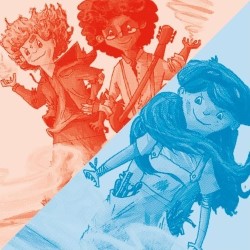 I Got Superpowers For My Birthday

It is the eternal tale of light verses darkness, good verses evil and the fate of man and woman kind rests on the shoulders of three misfit kids who are on the cusp of their thirteenth birthday, and that seriously sucks! What next, being an adult? Gross!

The venue is a kids’ show performer’s dream. A tented tiered circus theatre in the round, cosy cushioned seats and golden back rests. And a plethora of balloons. Well, it is Ethan’s birthday tomorrow, little does he know that The Darkness has other things in mind. That night his not quite school mates William and Fiona and he each have a the same bizarre dream about a gargoyle. Also, each becomes aware of their newly acquired individual Superpowers. Ethan the conjurer of earthquakes, Fiona with finger triggered bolts of flame and William the ice creator wizard.

Cue sound effects similar to that iconic T Rex foot stomp in Jurassic Park. Indeed, the deliriously paced lighting and sounds compliment the action at breathtaking pace. The cast play many parts with the vocal special effects enhancing the gruesome monsters with relish. The best and only true barometer of shows like this is to watch the kids’ drop-jaw, knee- hugging body language, and they are hook, line and sinkered with this utterly captivating show. No spoiler alert because we are keeping utterly schtum. Suffice to reveal though that the kids get to use their Superpowers to eventually vanquish the baddies, several of which have the gall (and copious snot) to gatecrash the party.

Severely recommended, Adults will understand some of it, just!