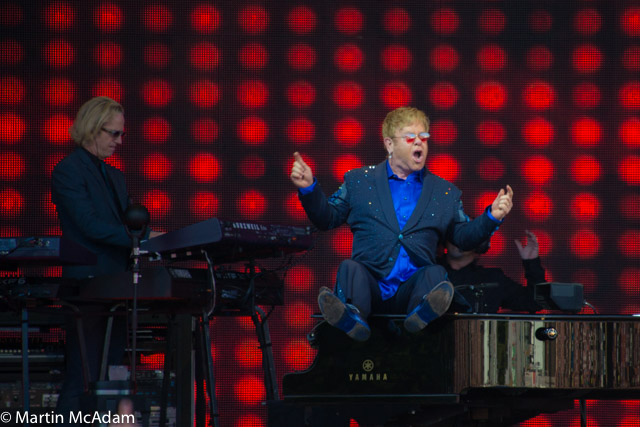 He plays over 100 concerts a year. He has made 32 albums and has sold around 300 million records.

He has a knighthood – and a CBE. He is as British as you can get, Reg Dwight from Pinner, and at the first juncture he told us all that he loved coming to Scotland and had spent childhood holidays here. But there is more to it than that. A staunch Remain supporter in the recent EU Referendum, he wasted no time telling the audience : “You are the only sensible people in this f***ing country.”

Sir Elton asserted his views on the EU a while back on Instagram : “Build bridges not walls. I’m voting to remain #StrongerinEurope” along with an image of an African proverb which recites: “If you want to go fast, go alone. If you want to go far, go together.” So back to the music…

Was he any different from the first time I saw him? The answer, in strictly musical terms, is no. Sir Elton is a perfectionist who plays the complicated piano accompaniment which his songs require very easily, but with great attention and care, all testament to years of professional study at the Royal Academy of Music. I have been to several Elton John concerts over the years, at a variety of indoor and outdoor venues, and every time have come away buzzing with delight at the music, the artistry and the show.

And in Edinburgh on Saturday night it was no different.  The 69 year-old megastar may look a little different, but he rocked Meadowbank as th0ugh none of the intervening years mattered much.   He is generally considered to be a music legend, and rightly so.

Council-owned Meadowbank was the place to be on Saturday with the Culture Convener and the Council Leader spotted among the crowds.

From the beginning of the evening right to the end of his 2 hours 20 minutes, the Rocket Man played flawlessly. The backdrop was pretty simply done with photos and graphics, and, in the case of Rocket Man, some footage which may have been shot from the International Space Station. There is a band of six on stage, but no groups of backing singers, and quite simple lighting effects on the stage set on one side of the stadium. The music is central to the show.

And this band is an experienced one. Nigel Olsson on drums has been a constant member of Elton’s band since 1969, along with Edinburgh’s own Davey Johnstone who has to get the prize for being the most iconic-looking rock and roll star with his flowing locks. So the line-up is cohesive and familiar and they gave it their all last night.

With more than fifty top 40 hits to choose from John has such a lot of material and it would be hard not to play some of the big numbers. And he did. He played Crocodile Rock as a finale which had everyone in the all seated venue on their feet. Earlier in the set he sang Good Heart from his new album saying : “I am dedicating this to all of you lovers out there.” He also sang Blue Wonderful, a new song too, and yet another penned by Bernie Taupin.

Five Grammy Awards and  five Brit Awards are only some of the accolades the pair have gathered during their fifty year partnership which continues unabated with Taupin almost as well-known as Elton.

The crowd loved it. The sun shone, and only a very few thought that Saturday night was a night for fighting. There might have been 200 security staff on duty to ensure the safety of the 14,000 strong crowd, but they were good-humoured and helpful, with police in the minority. We loved this guy who was having a great time, while doing his job!

Even the security staff can’t help joining in! pic.twitter.com/wJDyIA7e81

And Sir Elton seemed to enjoy his night too along with his chum, Friends star Courtney Cox, seated in the VIP area as his guest.

There are two UK dates left on the tour, the first of which is today at Blenheim Palace.

The Bitch is Back

Benny and the Jets

I Guess That’s Why They Call it the Blues

Have Mercy on the Criminals

Sorry Seems to Be the Hardest Word

Burn Down the Mission

Don’t Let the Sun go Down on Me

Saturday Night’s all right for Fighting

Candle in the Wind