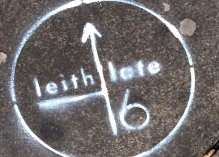 LeithLate 16 launched its jam-packed programme of art events with a launch party providing the locals of Leith with top notch Scottish talent on Friday night.

Nice Church kicked it all off with some classic indie rock and roll before DTHPDL took to the stage to loosen the audience up with some fantastic progressive art rock. Synth heavy with some musical nods to Placebo at points, they were well received.

CARBS finished the live set off with Jonnie Common and Jamie Scott’s lyrical drawl, enthusing the crowd to dance and move their shapes to intelligent lyrics about such menial, unexpected everyday things, such as pizza.

The full LeithLate16 programme, exhibitions and events, takes place over a four-d Highlights include a twinning with Deptford X with work by Ian Gouldstone, a LeithLate currency commission with Rabiya Choudhry, site-specific installations from Juliana Capes, the Dennis and Debbie Club and Kosmischer Läufer, invited collaborators in the form of Place + Platform, Back Garden Biennale and Eye Am Camera AND the return of the one-night event on Thursday 23rd June across 25 venues with over 100 participating artists and musicians!

If their launch party was anything to go by then your weekend should be filled with LeithLate 16 activity. Their programme only seems to get more exciting year on year.