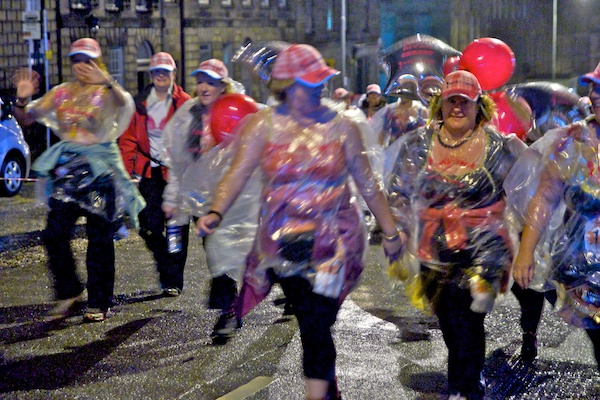 The walkers are ready for the off later this evening, and the gates at Holyrood Park where the start and finish lines for the Moonwalk have opened around 8.30pm. There are four distances : New Moon 6.55 miles, Half Marathon 13.1 miles, Marathon 26.2 miles and Over the Moon which is 52.4 miles. The walkers have to look out for these signs which are all over the city centre!

Many of the capital’s buildings will be lighting up pink to give all the walkers a bit of a boost as they pass by.

Look out for The Balmoral, Jenners, House of Fraser, Lloyds on the Mound, St Giles Cathedral, The Roxburgh Hotel, Camera Obscura, Queen Victoria on the front of the RSA at the foot of The Mound, The Radisson Blu and the Royal Yacht Britannia which are all turning pink tonight.

The hundreds of thousands of walkers have raised over £19 million for the breast cancer charity.

Walk the Walk has also funded the renovation of Ward 6, a new theatre and renovation of the Mammography Unit at the Breast Cancer Institute at the Western General Hospital.

You can help in two ways: