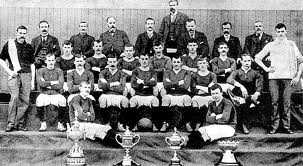 Every day this week the Edinburgh Reporter has highlighted a Scottish Cup Final featuring Hibernian Football Club and we finish with perhaps the most famous of them all.

Every football fan from the capital knows that Hibs last won the Scottish Cup in 1902. Hibs’ supporters are reminded of this statistic every year whenever a cup tie is played, and rival Hearts’ fans even have a song to commemorate the fact.

By the start of the 20th century, professional football was attracting crowds of up to 30,000, with Hibs considered to be one of the most attractive teams in the country.

Goalkeepers were permitted to handle the ball anywhere in their own half, and Hibs had a remarkable character in Harry Rennie who kept goal on the half way line. In defence, full backs Archie ‘Baldy’ Gray and Bob Glen supported a formidable half back line of Bernard Breslin, Jimmy Harrower and Alex Robertson.

Paddy Callaghan’s career started in 1898 when he sacrificed a junior cap to sign for Hibs from Jordanhill, and he then remained with the club for 17 years. He was capped consistently for Scotland against Ireland on the grounds, he felt, that he could act as an interpreter.

Amazingly he was deaf, or so he pretended, but he broke his nose against Third Lanark and his hearing miraculously returned.

Bobby Atherton was the first Hibs player to be capped for a country other than Scotland. Although born in Wales in 1876, he was brought up north of the Border.

Hibs were desperate to bring the Scottish Cup back to the capital, and started the 1901/2 campaign with a 2-0 home victory over Clyde then travelled west to dispose of Port Glasgow Athletic 5-1. At Hampden Park, a 7-1 victory over Queens Park set up a semi-final against Rangers.

In those days, semi-finals were not played at neutral venues, so Hibs had to travel to Ibrox, but the 2-0 win came at a cost with right winger Willie McCartney suffering a broken leg.

The final was scheduled to take place at Ibrox, but a few weeks before the game, the back of the newly built West Tribune Stand collapsed due to heavy rainfall the previous night, during a Scotland v England Home International. 25 people died and 517 were injured, but the game was allowed to continue to avoid supporters exiting en masse crowding the area obstructing rescue workers.

Instead, Hibs sportingly agreed that the game could be played at Parkhead, the home ground of opponents Celtic.

In the lead up to the game, the players were confined to the ground during the evenings to prevent them taking advantage of the local hostelries, and reportedly plied with mugs of hot chocolate and doorstep sized sandwiches.

Gale force winds in the west of Scotland limited the crowd to around 15,000, and those who stayed away missed little during a dull first half, which suited the Hibs players as they were playing into the strong wind.

Jimmy Harrower in particular did a fine marking job on former Hibs player Sandy McMahon who had been at the club in the latter days of the ‘Old Hibernian’. With Celtic unable to harness the wind, keeper Harry Rennie had a comfortable 45 minutes.

In the second half, the winds were so strong that clearances from the Celtic defenders were often blown back into the penalty box or for corners, so there seemed little chance that the Glasgow team would be able to progress sufficiently to worry Rennie, but that’s exactly what they did.  George Livingstone broke away and his shot beat the Hibs keeper but rebounded off the crossbar, to the feet of Celtic forward William McCafferty who made a mess of the opportunity.

Hibs then dominated possession and a goal seemed to be only a matter of time.  Bobby Atherton looked as if he had scored it with a splendid effort, and even danced a jig of joy, but to his dismay and that of the Hibs fans in the ground, the ‘goal’ was disallowed.

The referee’s decision only postponed the inevitable and a few minutes later, Paddy Callaghan took a corner which rolled along the ground. Bobby Atherton standing at the near post allowed the ball to run through to Andy McGeechan who wheeled and struck into the net from close range.

An unfounded rumour persists that a Hibs player did a fine imitation of Celtic keeper McFarlane’s distinctive brogue to persuade full back Barney Battles to leave the ball as it came across. Despite the Celtic protests, referee Mr Murray from Stenhousemuir heard nothing untoward and the goal stood.

Hibs continued to press forward and should have increased their lead but with time running out, a last minute counter attack from Celtic almost brought an equaliser.

The cup was presented to Hibs Club President Phillip Farmer, Great Uncle of current owner Sir Tom Farmer, in the Alexandra Hotel. There was a band at Queen Street Station in Glasgow to see of the triumphant heroes, and another to meet them at Haymarket.

A ‘brake’ carried the team, with captain Bobby Atherton holding the trophy aloft along Princes Street to the Waverley Station where traffic had been stopped because of a reception by a crowd of ten thousand, the biggest yet for a cup winning team.

Straight away, Hibs were invited to take part in the Glasgow Charity Cup and in the final, proved beyond argument their superiority to Celtic by winning 6-2, having been 5-0 up at half time.  The Hibs trophy room then contained four trophies, The Scottish Cup, The Glasgow Charity Cup, The Rosebery Cup and the East of Scotland Cup.

The following season, Hibs won the Scottish League Championship for the first time, losing only once in the 22 games played, gaining 37 points from a possible 44. Dundee were runners up with 31 points.

There was a sad post script to the legendry cup winning team. After a short spell with Chelsea, Bobby Atherton returned to Edinburgh and stayed in Elgin Street near to Easter Road. He served in the Merchant Navy during the First World War and drowned when his ship, the Britannia, disappeared without trace. Sailing out of Leith, it was believed to have been sunk by a mine or enemy submarine in the North Sea on or around 19th October 1917.

Can Jason Cummings emulate the deeds of Andy McGeechan and score the goal which brings the trophy back to Leith.

Find out on the Edinburgh Reporter’s website immediately after the game.