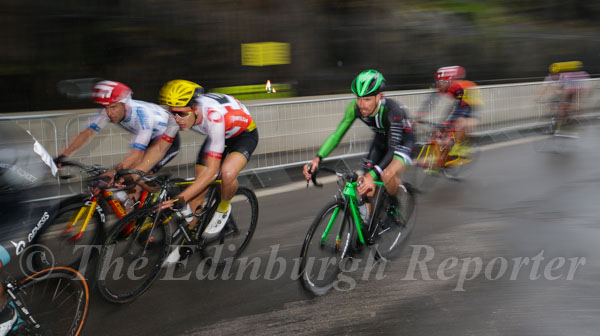 Success over the cobbles for JLT Condor’s Graham Briggs The Pearl Izumi Race Series returned to Edinburgh on Thursday night for the third round of the 2016 competition.

The organisers had set out a longer course than when the race was here previously with almost all of the cobbled section uphill. The start was in the Grassmarket and the riders immediately faced the cobbled climb of Victoria Street, from where they turned left along George IV Bridge, up to the High Street junction and left again, up the – cobbled – Lawnmarket. A bit of relief was then at hand as they peddled downhill into a stiff headwind on Johnston Terrace. After this brief respite, it was up Spittal street, left up Lady Lawson Street, then a fast downhill back to the – cobbled again – Grassmarket. 1.6km of testing roads which were, all-in-all, a fair test of man and machine.

The main race was preceded by a couple of warm-up events involving club cyclists and corporate invitational teams, the first of these – the Edinburgh RC Tour Series Support race – was won by Lewis Oliphant, brother of Team Raleigh pro, Evan. The Brother Corporate Grand Prix, run just prior to the Pro Race involved a Pro-Am relay with teams of five riders, plus a Pro, competing in a relay event over the full course. This was won by The Edinburgh Road Club team.

With the support events being run off in early evening sunshine, hopes were high for a fast and exciting race from the Pro squads, but, as ever, on the stroke of 7:30, just as the race was about to start, the heavens opened and the rain continued to fall for virtually the whole race, making the transition onto the cobbles very tricky indeed.

However, these guys are Professional riders and the slippery conditions didn’t seem to faze them as they went about their jobs and presented the sodden spectators with a fast and exciting race.

An early break from a couple of riders was soon reeled in and the main bunch stayed together for the first half of the race, when Briggs used the climb up Victoria Street to open a gap on the field and break away, pulling out almost a minute’s advantage by the finish.

Rory Townsend (Pedal Heaven) and Chris Lawless (JLT Condor) finished in second and third, respectively, with Madison Genesis, who are defending team champions taking the team prize. Evan Oliphant, despite keeping pace with the leaders early on, eventually finished down in 18th place.