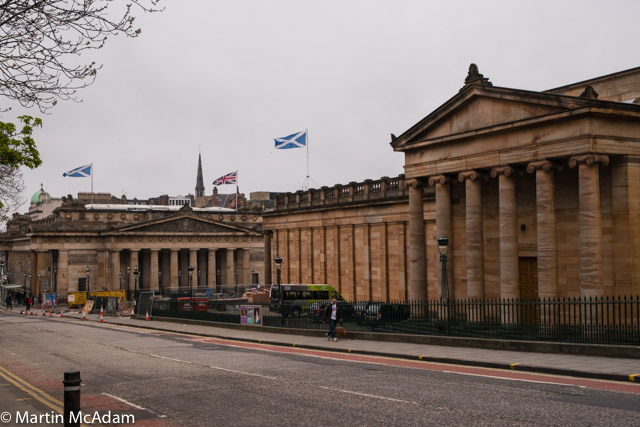 The Council Leader, Andrew Burns,  announced yesterday that there will be an independent inquiry into the reasons behind 17 schools across the city being closed last month.

The schools were either built or renovated under the PPI scheme and are now managed by Edinburgh Schools Partnership. Some will remain closed till after the summer holidays, although defects in others will be fixed sooner.

The problem is that there are no wall ties attaching some walls to the steel construction underneath, meaning that the council cannot allow pupils and staff into the buildings as they are potentially unsafe.

Read our articles about the inquiry and what it will cover here.

Watch our interview with the Council Leader here:

The Edinburgh Reporter News – Update On Schools Closure from Phyllis Stephen on Vimeo.

Over 850 young people on the brink of joining the workforce connected with 100 recruiting businesses at jobs roadshows in Edinburgh, East Lothian and Midlothian. With over 800 live opportunities and careers development guidance available for students about to leave school or college as well as those who have left in the last three years, organisers are hailing the inaugural events programme a success. Numerous interviews have been set up on the back of connections made at the events. The roadshows, at the end of April, were the first organised events held by the Regional ‘Developing Young Workforce’ (DYW) group for Edinburgh, East Lothian and Midlothian’s since launching in December last year. Plans are in place to repeat them annually.

Employers from business such as Scottish Power, House of Fraser and NHS Lothian were impressed by the level of the talent, confidence and drive the young people expressed at the events. Organisers anticipate a significant number of opportunities will be secured as a result of the programme, including full and part time employment, apprenticeships and paid internships.

Robert Allan, HR Director at Apex Hotels said: “We had a really positive experience at Jobs Roadshow Edinburgh. It was a great opportunity to inform young people of the careers available with Apex Hotels and encourage them to apply. Jobs Roadshow brings together businesses with recruitment needs and young people leaving school and college, it offered us access to young people who were actively seeking opportunities. I am sure we will receive more applications from young people to join our organisation as a result, the event really worked for us”. An exhibition  housed in the City of Edinburgh Council’s free-to-visit Queensferry Museum, has a display about life during the First World War. The display by the Queensferry History Group portrays trench warfare, the mighty Jutland sea battle and life in the Royal Burgh between 1914-1918.

Maps show where some of the 103 war dead from Queensferry and Dalmeny lived and the battlefields where many of them died. One panel tells the story of the bloody battle of the Somme, and another the lives of local women during the home front.

Featuring medals, uniforms, photographs and memorabilia, the ‘Queensferry at War’ exhibition also sets out to describe the Battle of Jutland where over 250 ships of the British and German navies clashed.

A spokesman for the History Group said: “We hope children in particular will visit the Museum and get to know the men from Queensferry who went to war and never returned. Using seldom-seen photos, the exhibition will give visitors a feel for the town during the four-year war as a place for off-duty sailors to relax and where casualties from Jutland were treated at Butlaw hospital adjoining Port Edgar.”

Local Councillor Norman Work said: “Like many Scottish towns and communities during the First World War, Queensferry suffered from a terrible loss of life. The names of the sons, fathers, brothers and neighbours who tragically never returned have been immortalised thanks to Queensferry’s war memorials, but this exhibition remembers the men behind the names.

“Their medals and photographs, which have been lovingly passed from one generation to another, have been carefully displayed by the history group. It is fantastic to have their research chronicled in our museum. It is free to visit and a timely reminder of the Royal Borough’s war history ahead of the 100th anniversary of the Battle of Jutland this May.”

The exhibition is funded by the Almond Neighbourhood Partnership.

The ‘Queensferry at War’ exhibition will be open over the summer to include the anniversary commemorations for the Battle of Jutland later this month. Opening hours are Monday, Thursday, Friday, Saturday 10am – 1pm and 2.15pm – 5pm,  Sunday 12pm – 5pm. Closed Tuesday and Wednesday.

Flying Scotsman returned to the East Coast Main Line, an electrified line, after a 10-year, £4.2 million refurbishment by the National Railway Museum in February with an inaugural journey from London King’s Cross to York which was greeted by thousands of people lining the route.

However, the day was marred in parts by several dangerous incidents of trespass – where members of the public were seen walking along the tracks and taking photographs of the locomotive while other trains continued to pass on opposing lines.

Photographs shared online show crowds of people, including young children, stood in the path of oncoming trains with their view obscured by plumes of steam and smoke from the engine.

All trains on the East Coast Main Line had to be stopped as a result, causing a combined total of over 8 hours of delays (516 minutes) to 59 train services, costing the taxpayer almost £60,000 in compensation which was paid to delayed passengers.

Flying Scotsman is now on tour throughout the summer and will visit Edinburgh on Saturday 14 May. Meanwhile Network Rail, the British Transport Police and other industry partners have issued a warning to those who are planning a visit of the dangers of straying onto the tracks.

While the turnout to see Flying Scotsman so far has shown the passion and support for steam engines, and indeed the railway itself, the images of people stood on the railway taking photographs were deeply concerning and a breach of our safe operations.

I cannot stress enough how dangerous it is to go onto the railway without any formal training and without permission, as well as being illegal. I am urging those who plan to enjoy seeing Flying Scotsman in the coming days to do so from a safe position and do not go onto the railway under any circumstances. I’d like to thank those who have observed safe practices during the Scotsman’s runs so far and ask others to follow that example.

We understand people are excited about seeing the Flying Scotsman’s return and want them to have a great day out.

Our priority is the safety of the public and passengers viewing and travelling on the train. The railway is a hazardous environment and we would urge people to use safe vantage points to view and take pictures of the train, stay clear of the line and not be tempted to risk their lives and the lives of others by trespassing on the tracks.

To ensure the safety of those wanting to see the Flying Scotsman we have been in extensive planning discussions with the rail industry. Our aim is that members of the public are able to enjoy these great events by understanding the dangers, being responsible, staying within the law and most importantly – keeping safe. Trespassing on the tracks to view the service is not only extremely dangerous and can result in the train’s journey being delayed, but it is an offence for which the offender risks being brought before the courts, a fine of £1,000 and a criminal record. Where people are found to be trespassing, we will take proportionate and necessary action against them.

Jim Lowe, head of operations at the National Railway Museum, who purchased the iconic locomotive for the Nation in 2004 and restored it to steam through a complex overhaul said:

While we understand interest in our celebrity loco Flying Scotsman will continue to be extremely high, we urge those wishing to view it on its UK tour dates do so from a safe vantage point.

We wish those who are taking journeys on trains hauled by the steam icon or going to see it at an event over the coming months an enjoyable experience.

For the latest conversations about the return of Flying Scotsman, use or track #FlyingScotsman.