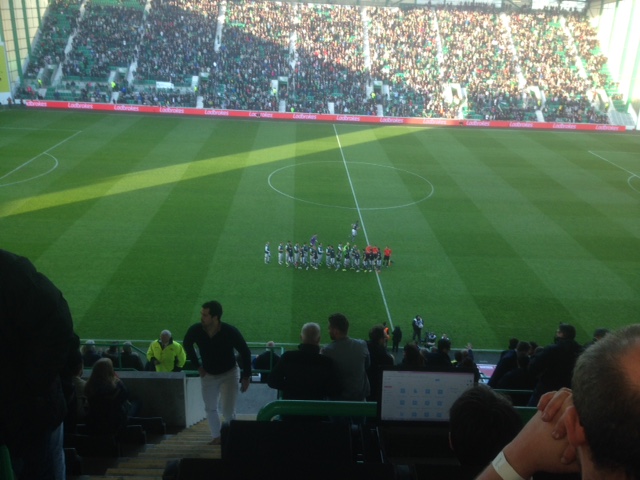 Furious Hibs’ fans have taken to social media to complain about referee Alan Muir’s decision not to award a penalty following a handball by Falkirk defender David McCracken at Easter Road last night and also to demand a retrospective red card for Aaron Muirhead for a deliberate kick on Liam Henderson in the immediate aftermath.

At the time Hibs were leading 2-1 and a penalty would have given them a great opportunity to take a two goal lead to the Falkirk Stadium on Friday.

John McGinn collected the ball from a neat Liam Henderson flick and drove into the box. The Scotland midfielder over ran the ball and both McCracken and Falkirk keeper Danny Rogers attempted to intercept it.

As the players collided, the McCracken clearly put his hand on top of the ball and scooped it away from the danger area.

The Hibs players and supporters claimed for a penalty kick but incredibly Alan Muir waved away their appeals.

As he was running away from the scene, Falkirk defender Aaron Murhead blatantly kicked Henderson behind the referee’s back and both clubs are waiting to see whether he will receive a retrospective ban.

The game ended in a 2-2 draw and both clubs will meet again n Friday night.

After the game, a bemused Stubbs said: “I’m a bit at a loss for words. I cannot obviously say too much. It could be massive, it should have been. The ref told me he’d seen it. Why didn’t he give it? That’s why I can’t say too much.If he saw it then I think everyone in the stadium knew it was a penalty. He has admitted he saw him touch it. It is one of those decisions.

“That is why I think the referee should explain it. You just want them to get these big calls right. You ask for consistency but you want the officials to get it consistently right.”

McCracken admitted handling the ball but insisted that the referee was correct not to award a penalty.

He said: “The motion of my tackle brings my body shape around that way and my hand goes on the ball. It is a handball but I think the ref got it right.

“To be honest, I wasn’t fearful that he would point to the spot. Sometimes when things like that happen you kind of stop for a wee second because you have that fear that you’ve handled it, but I continued and possibly that has helped the referee’s decision.”

Falkirk manager Peter Houston claimed not to have seen the incident however if it had been a penalty, then it made up for one awarded by the same referee to Hibs against the Bairns in October from which Jason Cummings scored in a 1-0 win, the only victory in five clashes between the sides this season.

Houston said: “I’ve not seen the incident back but I’m a great believer that things balance themselves out over the course of a entire season.

“Back in October, in the only game out of five that has produced a winner between Falkirk and Hibs, they were given a penalty that was never one.

“So if we have got the rub of the green tonight I will take it because we are due it.

“We should have had something from the match that night. But we didn’t and everyone I spoke to afterwards said it wasn’t a penalty.

“If it should have been given for Hibs tonight they just need to deal with it and get on with it. We would probably have taken a draw before the game and with the way the game went it was probably a fair result.

“It is winner takes all on Friday. It gives us the opportunity to get to a play-off final.”