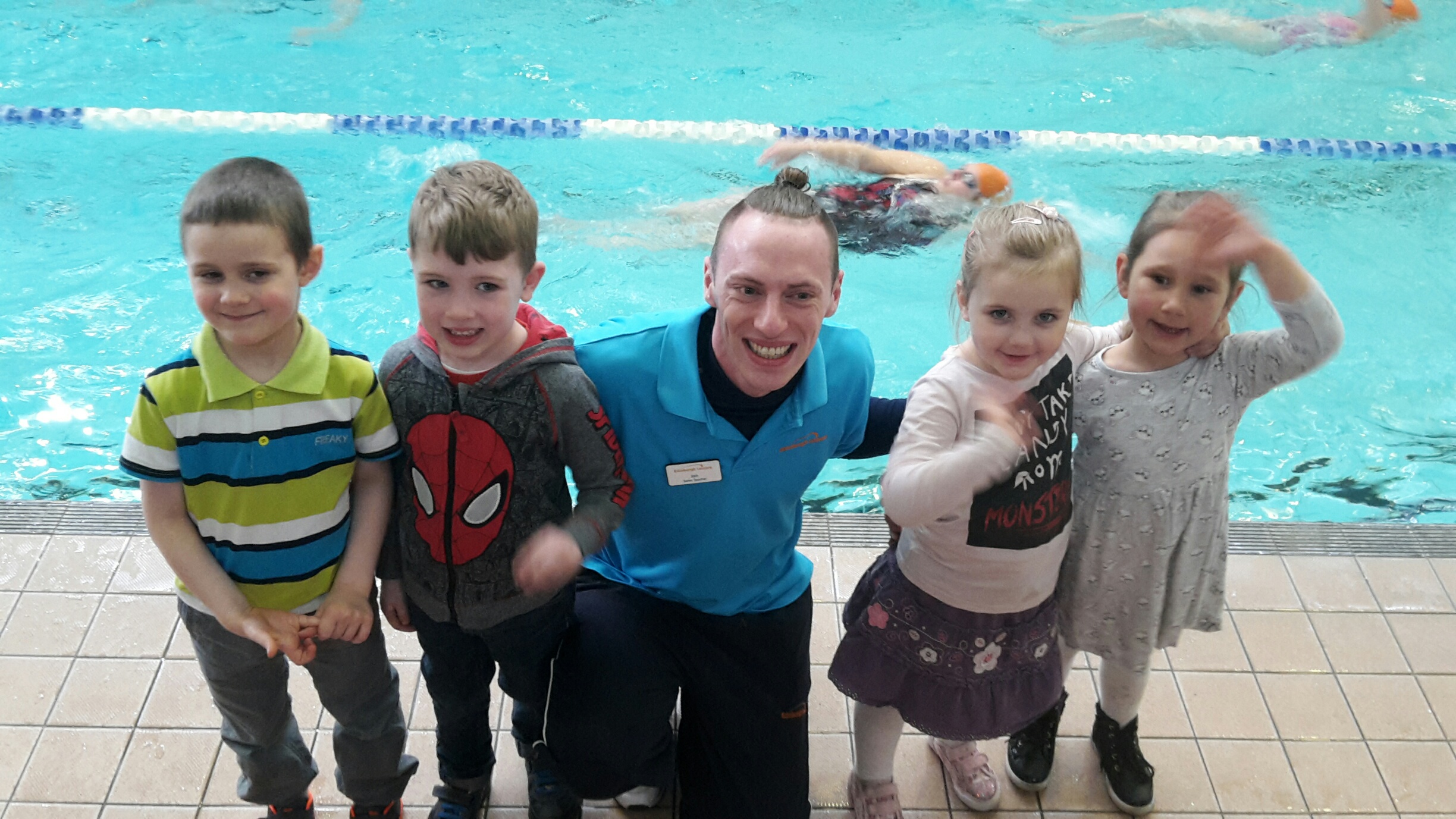 Ten staff from Edinburgh Leisure jumped in to help raise money to fund essential swimming lessons for children from disadvantaged backgrounds in Edinburgh. Children from Stanwell Primary School came down to Leith Victoria Swim Centre to cheer them on.

The staff took part in the inaugural ’10 x 10 Swim Challenge’, which involved a team of 10 staff, swimming 1km each in all 10 of Edinburgh Leisure’s pools in one day on 6 May. All sponsorship raised will help to continue to fund the ‘Jump In’ project, which gives pre-school swimming lessons for nursery pupils living in areas of multiple deprivation in the city. The team have raised over £2,000 for the #10x10swimchallenge.

The team have been supported by Landmarc Support who have supplied transport and refreshments for the team. Landmarc’s Regional Operations Manager for Scotland, Kevin Kneeshaw said: “Jump In is a great initiative so we’re really pleased we could be involved by transporting the swimmers between each of the ten locations. We hope this challenge has helped to raise awareness of this vital project to support essential swimming lessons for disadvantaged children.”

Andrew Stephenson, Funding Officer at Edinburgh Leisure explained: “Since the ‘Jump In’ project started in 2012, it has taught 1,213 nursery school children affected by poverty to swim, embedding crucial life skills that keeps children safe around water by improving their water confidence and swimming ability.

“As a charity, Edinburgh Leisure relies on funding from trusts, companies and individuals to keep this project going. This will be the first time that as not-for-profit organisation that we have organised our own fundraising event, which we hope will enable even more children to learn essential life skills.”

Swimming can have a really positive effect on an individual’s mental wellbeing, with additional wider social benefits including better educational attainment and improved confidence.

Yet despite these great benefits, 40% of Scotland’s children leave primary school unable to swim. This number increases significantly in areas of deprivation, which is poignant when more than one child in every five living in Edinburgh is affected by poverty.

This social injustice means that these children are often excluded from learning to swim, placing them at a higher risk of drowning and losing out on the chance to develop their physical abilities and communication skills that their peers can learn during swimming lessons.

The decline in children’s swimming ability is linked to an eight percent decline in the number of people swimming recreationally (Sports England), especially families. As well as the negative impact on a child’s ability to swim and their water confidence, children who never get the opportunity to learn to swim are less likely to be physically active throughout their life, increasing their likelihood of major illnesses by up to 50% and early death by up to 30%.

If you have had a great experience of swimming and believe that all children should get the opportunity to learn to swim and would like to sponsor the team, donations can be made by texting EDLS65 £3 to 70070.