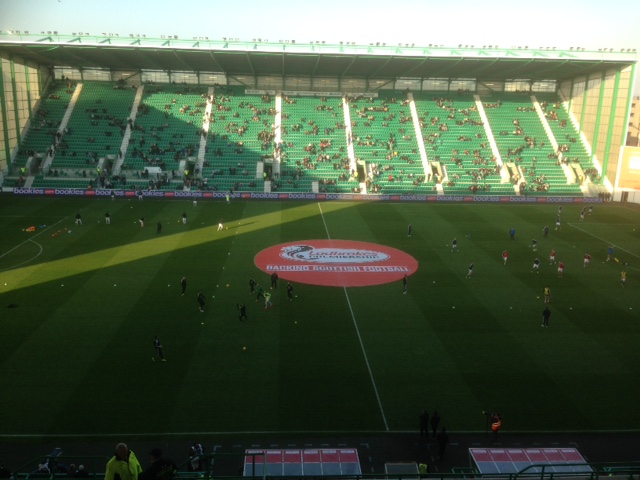 The play-off semi-final first leg ended all square at Easter Road tonight after a pulsating and often ill-tempered encounter but the main talking point amongst the supporters at the end was once again a refereeing decision.

Falkirk opened the scoring in the first half but Hibs fought back and took the lead before they were denied a stonewall penalty when Bairns’ defender David McCracken cleared the ball with his hand. Falkirk equalised near the end and both teams will go into Friday’s second leg on equal terms.

Head coach Alan Stubbs kept the same starting XI that beat Raith Rovers on Saturday and made one change to the substitutes with Marvin Bartley making way for Kevin Thomson.

Both teams had early chances before Craig Sibbald was lucky to escape a yellow card for a bad challenge on Dylan McGeouch.

The game was played at a frenetic pace with tackles flying in from both sides.

In the 14th minute some unity broke out as supporters from both teams applauded  in memory of former Falkirk player Chris Mitchell who sadly died a few days ago.

In the 27th minute Anthony Stokes broke clear on the left and his cross was cleared after some pinball inside the six yard box.

Falkirk took the lead in the 32nd minute against the run of play and in controversial circumstances. Sibbald clearly handled the ball before McGregor brought down Lee Miller just outside the area. Luke Leahy took the free kick which rebounded off the wall into the path of Taiwo. His volley struck the heel of Miller and flew into the top corner of the net with Conrad Logan helpless.

Logan claimed that Miller was offside but television replays confirm that he was onside.

The goal silenced the Hibs fans and despite dominating possession for the remainder of the first half they created no clear cut chances.

Hibs started the second half brightly and John McGinn went close with an effort from 10 yards which flew just over the bar. Moments later Hibs should have equalised when Cummings slipped a great through ball into the path of stokes but the striker was off balance and fired over the bar.

Falkirk started time wasting as early as the 55th minute to the annoyance of the home support but that changed moments later when Hibs equalised. McGeough sent a deep cross to the back post which Stokes headed into the path of Henderson and the youngster showed great technique to fire the ball into the net from close range.

Falkirk almost regained the lead when Will Vaulks volleyed just over from eight yards.

Hibs added a second in the 65th minute when McGregor bulleted in a header from Henderson’s corner and Easter Road erupted in a wall of noise.

Stokes set up Cummings but the ball was nicked off his toe as Hibs looked to add to their lead.

Moments later Hibs were denied a certain penalty. McGinn surged into the box but over ran the ball. Danny Rogers and David McCracken both went for the ball and in the melee McCracken clearly cleared the ball with his hand. The Hibs players to a man claimed the penalty but incredibly referee Alan Muir waved play on.

As he was running away, Aaron Muirhead violently kicked Henderson behind the referee’s back and the Falkirk defender could find himself in trouble if the television cameras picked up the incident.

With ten minutes remaining, Falkirk equalised, once again against the run of play. A long free kick was headed into the path of substitute Bob McHugh who had his back to goal. He swivelled and managed to get his shot away and the ball slipped under the body of Logan.

Stokes then went close with a long range effort which Rogers just managed to guide past the post then the on-loan Celtic striker hit the side net with another effort from distance.

In time added on, Hibs were awarded a free kick in a dangerous position but Rogers was able to catch McGinn’s cross and the referee blew his whistle.

Afterwards when questioned about the penalty decision, Stubbs said: “I’m a bit lost for words and can’t say too much but you have all seen it. Everyone in the stadium saw it and I think the referee should explain it. It was very surprising that it hasn’t been given.”

The clubs meet again on Friday night in the Falkirk Stadium.