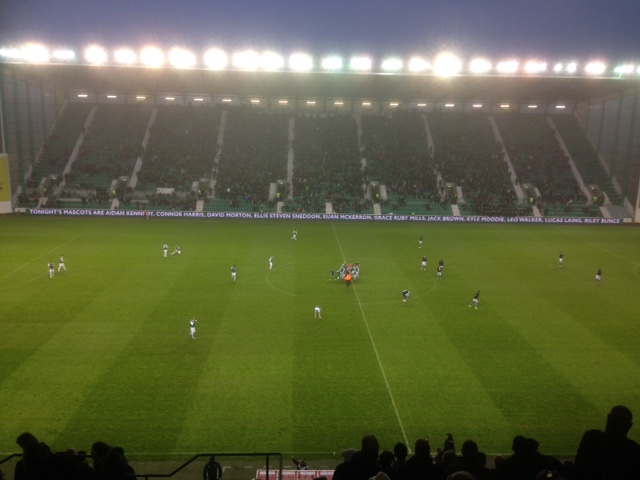 Ten man Falkirk fought back from 2-0 down to secure a share of the points and possibly second place in the Championship in a hard fought and often ill tempered encounter at Easter Road tonight.

Head Coach Alan Stubbs made three changes to the starting XI that lost to relegated Alloa Athletic on Saturday. Darren McGregor returned to the centre of the defence in place of Niklas Gunnarsson, Marvin Bartley replaced Liam Henderson and Martin Boyle who scored a wonder goal in his last home appearance took over from James Keatings.

A combination of rain, Champions League games on TV and apathy following a poor run of results limited the crowd to under 10,000, but those who chose not to brave the weather missed a cracker.

Falkirk started brightly but it was Hibs who created the first chance when Danny Rogers tipped a John McGinn free kick past the post.

Hibs then took the lead in comical circumstances in the 9th minute. There appeared to be no danger when Mark Oxley sent a long free kick into the Falkirk half. The ball was flicked into the air and David McCracken misjudged his header back to the keeper and as the ball was heading goalwards Jason Cummings pounced and hammed the ball into the empty net from two yards.

Two minutes later Bartley was booked for a late challenge of Myles Hippolyte as tempers flared on both sides.

Hibs had a penalty claim waved away when Aaron Muirhead appeared to hold onto Paul Hanlon at a corner kick but the defender then did well to cut out a dangerous Lewis Stevenson cross from the left.

Craig Sibbald was lucky to escape punishment for a late challenge on Fraser Fyvie then Taiwo was booked for a foul on Boyle.

Anthony Stokes almost added a second but his point blank header from Stevenson’s driven cross flew inches over the bar, then in the 38th minute, Cummings found Stokes who broke clear before being scythed down by Muirhead who made no attempt to play the ball. The Falkirk defender was booked but could count himself lucky to stay on the field.

Two minutes later McGinn was booked for a late challenge in front of the Hibs’ dugout which resulted in a mass flare up involving most of the players.

By this stage it looked as though referee Crawford Allan had lost control of the game so the break came at exactly the right time although he was roundly booed when leaving the pitch.

The second half started in the same tempo and the fans were on their feet when Stokes nodded the ball into the path of Cummings who rounded the keeper and was brought down however the far side linesman’s flag was raised for offside.

In the 47th minute David Gray was replaced by Gunnarsson having been the subject of a late challenge near the end of the first half, then Hanlon set up Cummings with a long pass but the strikers shot from the edge of the area was tipped over the bar.

Bob McHugh almost equalised in the 65th minute but his powerful strike hit Oxley’s heel and the danger was cleared,

Stokes then set up Stevenson but his cross  struck the roof of the net as Hibs pressed for a second goal.

In the 73rd minute Muirhead clattered into the back of McGinn and was correctly shown a second yellow card.

Seven minutes later Hibs were awarded a penalty when McCracken clearly impeded Hanlon at a McGinn corner and cummings grabbed his second of the night by hammering the resultant spot kick high into the roof of the net.

That should have been that however but with four minutes remaining, a long free kick into the Hibs box was met by McCracken who looped a header past Oxley into the corner of the net.

From then it was one way traffic with 10 man Falkirk desperately seeking another goal and in the last minute a long throw from Will Valuks was flicked on to McHugh who grabbed a dramatic equaliser with a diving header sparking wild celebrations from the travelling support.

Afterwards Stubbs said: “It was a marked improvement in terms of performance for 85 minutes then we shot ourselves in the foot with two lapses of concentration but there is a lot of football to be played yet.”

Hibs next game is against Dundee United in the Scottish Cup semi-final on Saturday at Hampden Park.