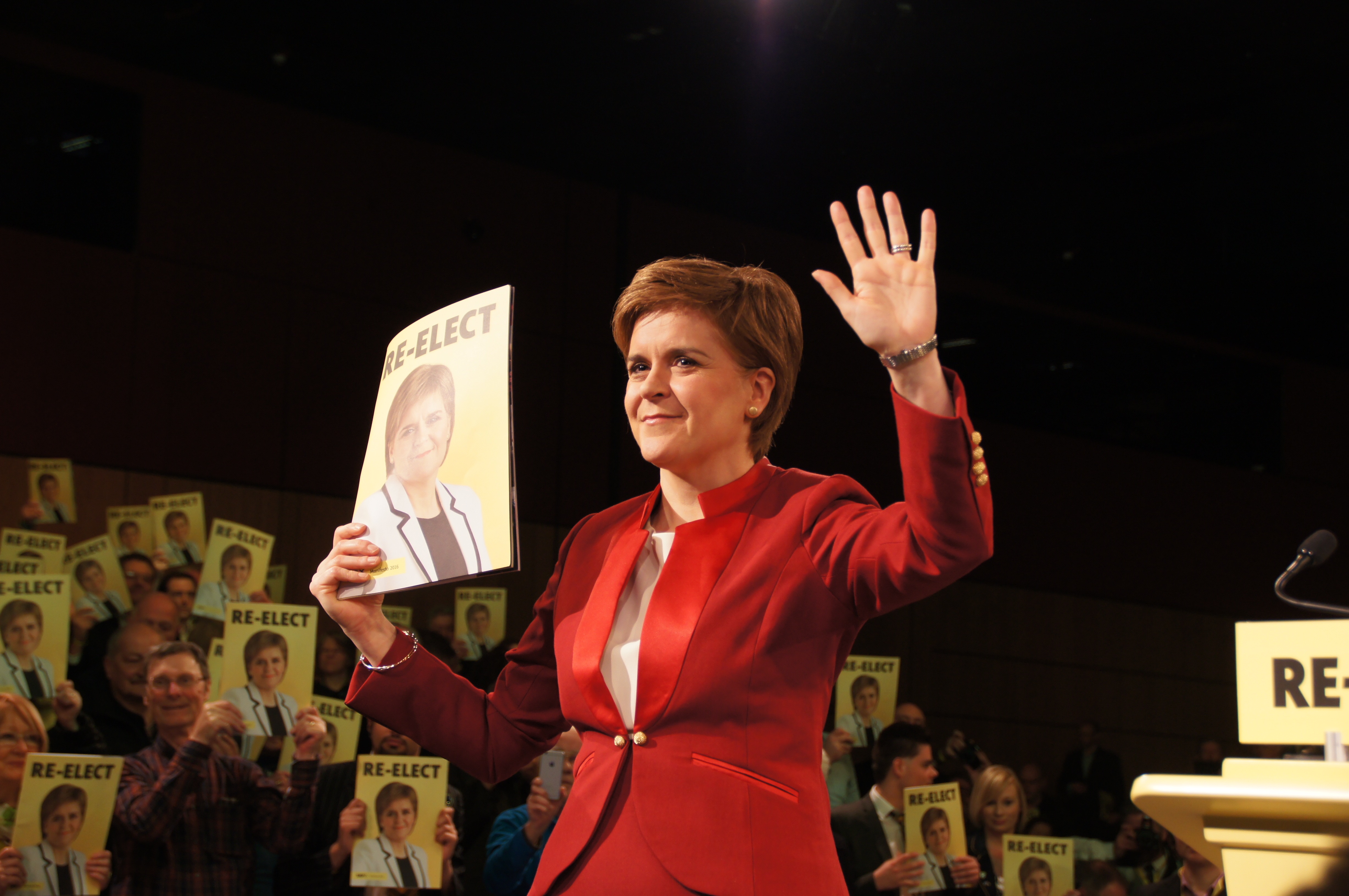 It had all the air of a boxing match – the stage set in the middle of the main hall in the EICC. The single podium. Lights, music and an array of press all eagerly awaiting the production of the SNP manifesto. And that was after queuing round the block to get in to the EICC in the first place.

We already knew some of what was in the manifesto magazine (huge it is  – bigger than A4!) that was eventually handed out, but if we wanted to know more then all we had to do was download the SNP app.

This is a party well used to the razzmatazz of campaign launches, manifesto launches and winning. The applause when first, John Swinney, second, Stewart Hosie MP and finally, Nicola Sturgeon, strode to the central lectern was exuberant and deafening from the estimated 1400 strong audience.

The party is almost sure to win the election, although the First Minister said once again that she was taking nothing for granted, and urged everyone to get back on the doorsteps this afternoon.

So what are the main points of SNP’s blueprint?

The manifesto is split into sections such as making this a Healthier Scotland, a Fairer Scotland and an International Scotland. These are some of the main points although there are others dealing with policing, international matters and rural sustainability. It promises a new land register to make land ownership more transparent and ‘end the scandal of anonymous – and therefore unaccountable – land ownership’.

For a Healthier Scotland Sturgeon was adamant that the additional £500 million would make all the difference as announced before the manifesto launch. This ‘bold, ambitious and reforming’ manifesto aims to protect free personal care for the elderly, and although the NHS has already had record levels of investment and ‘is delivering some of the best and fastest care anywhere in the UK’ , it apparently still merits more spent on it.

Some of the additional spend (part of an estimated further £2 billion for health) will be directed to the local integrated health and social care bodies. These are run by local authorities in conjunction with the NHS. At present there are 31 integrated health and social care bodies and 22 health boards and  the SNP want to review the number of organisations actually delivering this care across Scotland.

There will be money sent directly to headteachers with an additional £750 million to ‘close the gap in educational attainment’.

When the First Minister was asked if that meant academy schools in Scotland there was a loud guffaw around the room! She explained: “It will be the aim of a re-elected SNP government, under my leadership, to restore Scotland’s education system to pride of place as one of the very best in the world.

“We will develop a new, fair and transparent funding formula for schools, to ensure that resources go where they are needed most.”

A Jobs Grant will be introduced to support young people into work.

The plan is to spend £20 billion on modernising and updating infrastructure in Scotland, delivering broadband to all of the country and building 50,000 new affordable homes and continually improving transport links.

Basic rate income tax will remain the same for the duration of the next parliament and the tax threshold will rise to £12,750 by 2021/22. The SNP plan to retain the upper 40p tax threshold at the same level of £43,000 rather than raising it to £50,000 as the UK Government plans to do. All of this will mean a further £1.2 billion in the Holyrood coffers for the next parliamentary session.

The party plans to publish a Fairer Scotland Action Plan which will include recommendations from the Independent Poverty Adviser (and there are plans to reappoint someone to that position).

Gender and disability barriers will be overcome and there will be an Advisory Council on Women and Girls appointed to ‘ensure every young woman is able to achieve her potential.

The new welfare powers afforded to Holyrood will be used fairly and with ‘dignity at its core’. The First Minister was clear however that this is not to say that shirkers and scroungers will be encouraged!

Housing support for 18-21 year olds will be reintroduced to thwart the Tory cuts.

The proclamation on this was clear: “We will bring forward a new Climate Change Bill with a new target to reduce carbon emissions by 50% by 2020.

“We will ensure that, by 2020, at least half of all new renewable projects have an element of shared ownership and we will look to establish a government owned energy company to support local and community energy.” In a nod to how things might change for local authorities Ms Sturgeon announced: “We will work with local authorities to review their roles and responsibilities and get more powers into the hands of communities; we will look again at the structures of our NHS and at the relationships between local government and the NHS.

“We will extend participatory budgeting and encourage communities to make use of the new community empowerment legislation.”

So does this mean a review of how the local authorities are funded? Well there is no mention of that that we can see. While admitting that this would be something she would like, the First Minister was clear that the SNP would have to earn the right to propose a second referendum.  She explained that work will be done in the summer to investigate this possibility (after the EU referendum of course) : “If there is to be a second referendum – whether that is in the next parliament or in a future parliament – we first have to earn the right to propose it.

“Setting the date for a referendum before a majority of the Scottish people have been persuaded that independence – and therefore another referendum – is the best future for our country is the wrong way round.

“So this summer, we will start new work to persuade a majority in Scotland of the case for independence.

“If we don’t succeed, we will have no right to propose another referendum.

“But if we do succeed – if in the future there is clear and sustained evidence that independence has become the preferred option of a majority of the Scottish people – then no politician will have the right to stand in the way.

Sturgeon finished her lengthy address interspersed by loud cheers when Trident was mentioned by saying: “Let us win this election for Scotland!”

The Conservatives belittled the First Minister’s comments about the possibility of a referendum as making the whole SNP government an ‘uncertainty’.

The SNP’s manifesto has been branded a “recipe for uncertainty” after Nicola Sturgeon said it would be “when”, not if, there was a repeat referendum.

The First Minister unveiled the document in Glasgow, and said again that she’d launch another drive to break up Britain in the summer.

This is despite previously promising a vote on independence would be a “once in a generation” occurrence.

The SNP leader made it clear she wanted to secure a referendum re-run in the next five years.

It also a highlighted why it was so crucial for the SNP to have a capable opposition, she said, and reinforced the fact that the SNP has breaking up Britain at the top of its agenda.

“Nicola Sturgeon had the chance today to set a course that leaves the division of the referendum behind us.

“Instead she has made it clear she wants to put Scotland through five more years of rancour over the constitution.

“She promised the last referendum would be ‘once in a generation’.

“Today, she has broken her word to the Scottish people.

“Just as bad, rather than seek a mandate in her manifesto, she says she wants the right to call a referendum on independence just as soon as she thinks she can win one.

“It is a recipe for more uncertainty which will damage jobs and weaken the economy.

“As a strong opposition, we will fight every day to demand that a future SNP government focuses on the job in hand.

“We deserve a better government, not a re-run of the referendum.”

The Green Party had this to say:

“This election is about what kind of parliament we want for the next five years. Do we want a parliament dominated by a cautious government and its unquestioning cheerleaders? Of course we don’t. Governments are at their best when they are under constructive pressure, and the Scottish Greens have shown we can bring that pressure to bear where it counts, on everything from fracking and land reform to rent controls and fan ownership of football.

“The SNP manifesto keeps them on the same cautious path, when this is a time for boldness. Standardised testing and a tax break for aviation aren’t in any way justified, and the ambiguous position on fracking will cause real concern in communities at risk. A Warm Homes Bill follows years of Green pressure, but comes at a time when the SNP have cut fuel poverty funding. And on tax it is clear that only the Scottish Greens’ plans will close the inequality gap, protect public services and give local councils real control.

“The only way to ensure we have a bolder Holyrood with high ambitions for jobs in lasting industries, for investment in social care, housing and young people, is by voting Green. As Labour continue their decline there is an urgent need for principled, progressive voices in parliament and a strong group of Green MSPs would make a huge difference to our parliament and the direction it takes.”

“The whole manifesto is timid. Timid on tax and timid on ambition. It is a complacent offer from a party who think they have already won the election.

“Scotland can’t wait on the SNP. We need an immediate transformational investment in education that can only come from the Liberal Democrats’ penny for education.

“The SNP will continue to cut the share of spend on mental health. People will mental health problems can’t wait on the SNP.”

Scottish Labour have yet to comment on the manifesto for government, but their leader is in deepest Dumfries today, so perhaps that explains it.

All in all a very accomplished performance from the First Minister and the party machine behind it, no matter whether you support her politics or not.