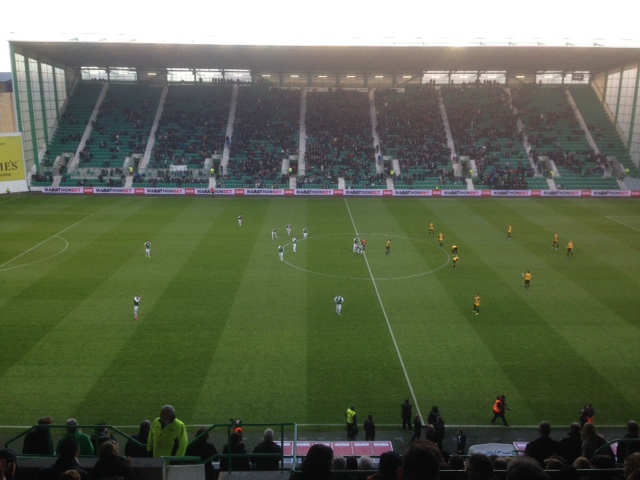 But for some inspired goalkeeping from Dumbarton’s Jamie Ewings, Hibs would be in second place in the Championship tonight, although a comfortable 4-0 win however means that goal difference could yet play a part in deciding who finishes runners up to Rangers.

Liam Fontaine recovered from injury to win a place on the bench.

Stubbs promised the fans that his players would attack from the start and he was as good as his word as Hibs took the lead in the 6th minute. Anthony Stokes picked up the ball in midfield and found Fraser Fyvie who slid the ball into the path of Keatings. The striker made no mistake from eight yards, firing the ball high into the net past Ewings.

Three minutes later Ewings produced a great save from a Liam Henderson free kick as Hibs looked to improve their goal difference and they did just that in the 13th minute when Boyle cut inside from the right. His shot was blocked and rebounded to Niklas Gunnarsson who fired the ball into Keatings path and the former Hearts player tapped the ball into the net from close range.

From then on it was one way traffic and Henderson went close with a long range effort but once again Ewings managed to tip the ball past the post.

In the 33rd minute the fans held a minute’s applause in memory of the Hibernian TV’s Martin Glancy who sadly passed away last week.

Moments later Jon Routledge was booked for a bad foul on John McGinn although the referee should have played advantage as Stokes had possession in a dangerous position.

Hibs almost added a third just before half time when Stevenson played a one-two with Stokes before sending a great cross into the six yard box but Gunnarsson just failed to connect.

Dumbarton dominated the early stages of the second half but Hibs looked dangerous n the break and Grant Gallagher was fortunate not to be sent off for chopping down Henderson.

Ewings then produced an unbelievable save from Stokes from close range after good work from Fyvie and Gunnarsson.

Stokes went close with a long range effort and was then booked after a flare up following a bad challenge on Henderson.

He took the resultant free kick but once again Ewings produced a superb save tipping the ball round the post.

The third goal eventually arrived in the 74th minute when Kevin Cawley and Keatings both went for the ball which looped over Ewings’ head into the net. It was impossible to tell who got the final touch however it is understood that the referee gave the goal to the Hibs’ striker.

Henderson and Gunnarsson both went close as Hibs looked to increase their lead then once again Ewings denied stokes with a fine save.

Dumbarton survived an incredible sequence of play with eight minutes remaining when Boyle beat three defenders but his shot struck Ewings heel and was cleared into the path of Lewis Stevenson who sent in a powerful strike which rebounded off the post.

The fourth goal arrived in time added on when Henderson’s corner was met by Hanlon. Once again Ewings produced a sensational save but the ball fell to Stokes who prodded it into the net for close range.

Hibs are now level on points with Falkirk who have a better goal difference. Hibs face Queen of the South at Easter Road whilst the Bairns are at home to Morton. Both games take place on Sunday however should Hibs score three more goals than Falkirk both teams will have identical records.

After the game Stubbs said: ” The result leaves things on an edge. We certainly have a fighting chance but we have to make sure we win on Sunday. Both teams have difficult games.”