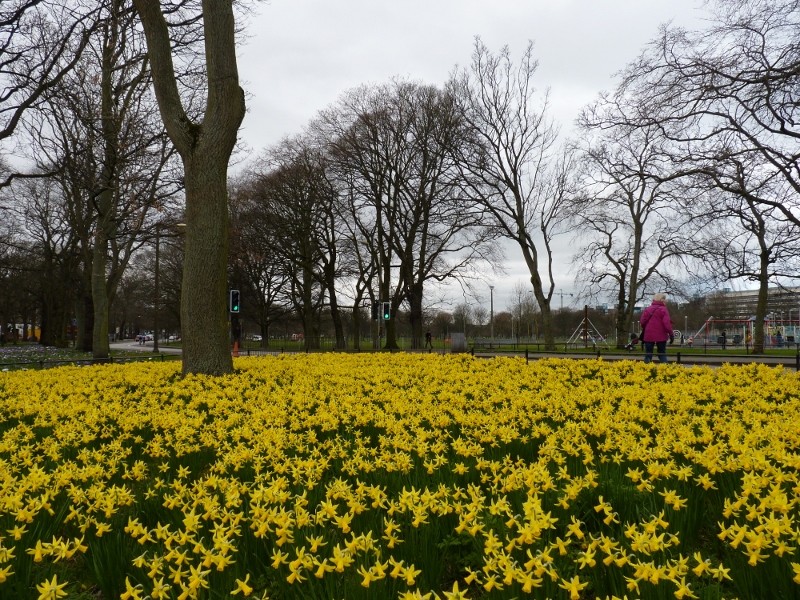 Easter for me means daffodils, lighter days, buds on trees, birds twittering in garden hedges and the first holidays of the year. This spring I have the company of a pair of magpies who are building a nest in a tree 20 metres from my back window.  I have been watching them at work, flying in with long twigs, cutting them in half with their beaks and then struggling to place them correctly on top of their precarious platform.  How do they know what to do ? How do they work without hands ? What fantastic energy drives them on ?

This spring busy-ness is reflected too in the human world. I watch my two daughters, now in their late twenties, buying homes, hatching families, struggling with their own long twigs to place them in right order to form a future on this precarious platform we call life.

The Easter holidays are also a chance to stop and catch our breath after the weary winter and assess where we are and where we are going. As a species, we’ve been doing this since the beginning of time. There isn’t a civilisation or religion in the world that doesn’t have a spring festival when people come out of hibernation and the idea of renewal and rebirth is celebrated.

So where are we and where are we going ? We are in a world of struggling economies, low oil prices, mass migration, climate change and terrorism. Here in Scotland we are heading into the exam season, an uncertain labour market, a general election, a referendum on Europe and a disillusionment with all political parties, except it seems the SNP.

On Wednesday, The Scottish Parliament met for the last time before the elections on May 5th. The session began with a motion of condolence for the victims of the bombings in Brussels.  But for all the talk of learning lessons and tightening security, there is not a lot we can do to combat such random attacks by small groups of fanatics.  Though, in the case of the Brussels cell – which was also responsible for the Paris shootings – it might have helped if Belgium was not a failed state, hopelessly divided by language and inequality, which has left a ghetto like Molenbeek a breeding ground for jihadists.

MSPs went on to happier things when they congratulated themselves on five years of hard work…the first term where we had a majority government. Its main achievement was staging the independence referendum but it has also done its best to hold off the “austerity” offensive from Westminster and held on to the achievements of earlier devolved parliaments, like free personal care, free university education and land reform.

Thirteen of those early devolution pioneers, who have been in the Scottish Parliament though thick and thin since 1999, are retiring at this election. They include Tricia Marwick, Annabel Goldie, Alex Fergusson, Kenny Macaskill, Malcolm Chisholm, Richard Simpson and Alex Salmond (though he remains an MP at Westminster and may well be back at Holyrood).

So we head into the election campaign, the first to be about taxation as opposed to spending, thanks to the latest devolution legislation. Both Labour and the Liberal Democrats want to put a penny on income tax to raise money for education.  Curiously, the SNP have sided with the Tories and want no change, as least for the coming year. And all parties have discovered that the much derided council tax is, after all, a good thing and they are all offering variations of this useful property tax.  Oh I know Labour are claiming to “abolish the council tax” but this is almost as Orwellian as the Chancellor renaming the minimum wage, the living wage.

From this week, Scotland is also heading into a post-coal future. The last coal-fired power station at Longannet in Fife is closing down as I write, reducing our CO2 emissions by 10m tonnes a year but also posing questions about how we are to power our homes and industries in the future.  We lost most of our steel-making industry in the last big emissions step-down but one remaining piece appears to have been saved this week, the Tata rolling mills in Lanarkshire. They are being sold to the international metals firm Liberty House, with a little help for the Scottish government, which intends to convert them into a scrap metal recycling plant.

This week we have also been celebrating, or at least marking, the independence day that never was. March 24th was to have been the day when Scotland became an independent country, if we had voted Yes in the referendum in September 2014.  The fact that we are still discussing it is proof that the issue is not settled. Opinion polls now suggest the SNP and the Greens may well win a second referendum, if one were to be held, say, on 23rd June, that fateful day when Britain will decide whether to leave or stay in the European Union.  And this despite the fall in the oil price, which several right-wing reports out this week claim would mean that an independent Scottish government would be struggling with a deficit of between £10bn and £12bn.

And so we leap forward this Easter weekend into summer time and a slightly unsettling future. But at least the daffodils and the buds on the trees reassure us that the life of the planet will go on much as normal. And my magpies have told me that all will be well.