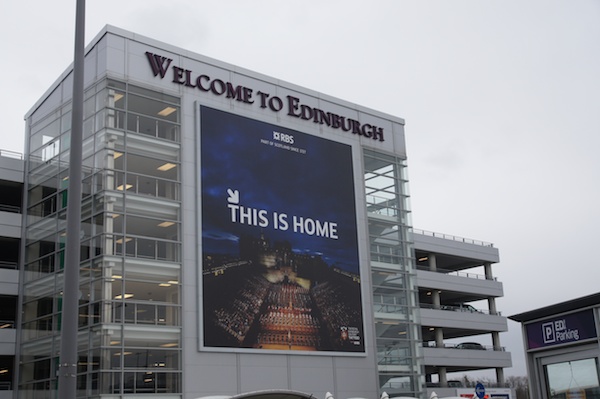 The Scottish Government has announced that it will now consult on the reform or abolition of Air Passenger Duty. It seems to have been a long time coming, but finally the tax is to be devolved to Holyrood.

The consultation will be open for 12 weeks till 3 June 2016 and will look at ways of replacing the UK tax with something new and different.

Part of the reason is that the Government already confirmed they would reduce the tax by 50% beginning from April 2018, and the Government has also said that they will abolish it entirely when circumstances allow.

The Deputy First Minister met with Gordon Dewar, Chief Executive of Edinburgh Airport which is Scotland’s busiest airport, to talk about the consultation plans.

The Edinburgh Reporter asked Deputy First Minister John Swinney MSP whether the Scottish budget could weather many more tax cuts such as this.

He replied: ” The Scottish Government is going to acquire the powers to set Air Passenger Duty in 2017. We’ve then got to legislate to put in place the regime that it is part of and that will take us to the start of the financial year in 2018. We want to get the approach correct for the Scottish economy. We want to do that in a fashion that creates economic benefit for the Scottish economy, and our proposals that we are consulting upon are to make sure we get the details right of how we take forward that reform.

“We’ve obviously taken steps in setting devolved taxes where we reshape the way we generate tax. So with changes to Land and Buildings Transaction Tax we will generate more tax than anticipated in this year, but we will be doing that in a different way to the tax we inherited from the UK Government. At the heart of our approach is tax reform and making sure that we get the circumstances correct for Scotland, but we also must be mindful of generating sufficient revenues to support our public services to support the Scottish budget.”

Gordon Dewar said : “If we can get this message out quickly then I have no doubt that the world’s airlines will invest even faster in Scotland. So there is a lot to be won. All of the routes we are trying to attract to Scotland, some of which are on the margin suddenly become feasible. We still have the most expensive tax in Europe, but it would be a step in the right direction.”

Patrick Harvie, Finance and Economy spokesperson for the Scottish Greens and MSP for Glasgow, challenged the SNP on its plans to cut Air Passenger Duty to encourage aviation growth.

It comes as data show that carbon dioxide levels in the atmosphere grew more in past 12 months than at any time in the past 56 years.

Patrick said: “In light of the latest climate change wake-up call, this is a pretty brazen announcement by the SNP. Persistence by the Scottish Greens resulted in ministers admitting that their APD policy would increase climate change emissions. After four years of failed targets, this policy simply does not stack up.

“Equally, it represents a further tax break for an industry that already pays next to nothing. Unlike every other form of transport, airlines don’t pay a penny of fuel tax.

“The SNP is trying to sell its policy with the hope that jobs will trickle down. What Scotland really needs to grow its tourism economy is investment in domestic public transport, decent broadband and a skilled workforce. Scottish Greens choose these priorities rather than putting more money in the pockets of a polluting industry and wealthy frequent fliers.”

Willie Walsh, IAG chief executive, said: “The Scots are right to start getting rid of Air Passenger Duty. But reducing APD in Scotland will undermine airports in northern England as passengers make a dash for the border to pay less tax. This will seriously threaten the Chancellor’s Northern powerhouse and lead to a domino effect across the UK.

“In Ireland, when they scrapped aviation tax, the number of Northern Ireland residents flying from Dublin increased by 52 per cent in the first year.

“The Treasury must acknowledge that a tapestry of different APD rates will not work. This stealth tax on holidays and business should be scrapped. APD places the UK at a competitive disadvantage as no other European country taxes holidays or makes business travellers pay up to £142 to trade with the Far East. It is costing the UK jobs and growth.”

Responding to the news, Mike Robinson, a Stop Climate Chaos Scotland (SCCS) board member who sits on the Scottish Government APD stakeholder forum, said: “This is about fairness. This is one of the highest polluting yet least taxed global industries.  This cut will further incentivise people to use the least sustainable transport option.

“Air Passenger Duty generates £230million per year for the Scottish Government so, with constrained public finances it’s hard to see how this can be justified.  At the same time, Scottish Government has cut spending on measures to tackle climate change in its recent budget.  So the priorities are somewhat confused to say the least.

“Every industry thinks it could be more profitable if it paid less tax, so the call from the aviation industry is hardly surprising.   But for the
Government to risk £230 million per year of certain tax revenue for an optimistic promise of future wealth creation, is high risk, and nothing is being done to consider or mitigate the inevitable environmental consequences.”

“The numbers flying today are higher than ever, so it’s a tax that customers are prepared to tolerate, in an industry that is regarded as under-taxed, so scrapping it makes no sense.

“Air travel has the highest climate emissions per km of any form of transport and emissions from the sector have risen significantly over the past 20 years.  We should use Air Passenger Duty or its replacement to reduce overall climate emissions.”