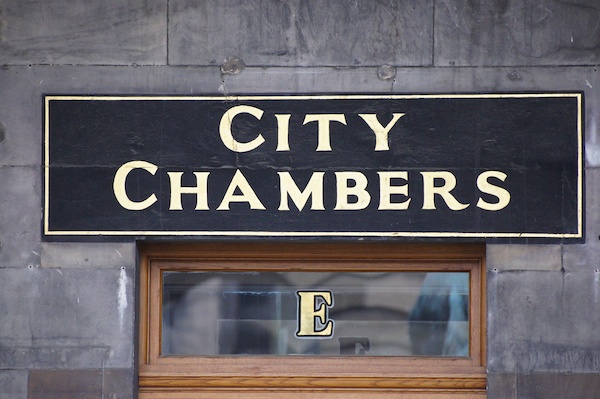 The capital demonstrated support for the people of Brussels yesterday who were caught up in a terrorist attack on their airport and a Metro station during the morning rush hour.

34 people are now known to have died.

Lord Provost offers his sympathies to #Brussels as #Edinburgh flags are lowered to half mast https://t.co/FqY6MAxL9dpic.twitter.com/xQAGbAJzJn

The Lord Provost wrote on his blog yesterday:

On behalf of all of the people of Edinburgh, I send our heartfelt condolences to Brussels and the families of those who have died and are injured.

I am sending a letter of sympathy to both the Belgian Consul General and Mayor of Brussels, but words can hardly do justice in the wake of such an attack and can only confirm that we stand with the people of Belgium.

The flags flying above Edinburgh City Chambers have been lowered to half mast as a mark of respect and support for all those affected.

Our thoughts are with the victims, their families and their loved ones at this sad time.

If you are worried:

A helpline has been set up for anyone concerned about people they know who were due to use Zaventem airport. The number is +3227537300.

For those in Brussels, the Crisis Center has set up an emergency hotline on 1771 but has asked that only those concerned about family and friends call.

Facebook has activated a “safety check” button for people in Brussels to reassure loved ones that they are safe.

Police Scotland has offered reassurance that there is no imminent threat in Scotland, but Assistant Chief Constable Ruaraidh Nicolson has asked communities to remain vigilant.

“Following the tragic events in the Belgian capital, Police Scotland has reviewed security and safety arrangements as a precautionary measure, which we hope provides reassurance to our communities.

“This is something we would do as a matter of course after such events and it is not in relation to any specific information or intelligence.

“Police Scotland is committed to ensuring all communities across the country are as safe as they can be and I would ask the public, especially around crowded places and transport hubs, to remain vigilant and alert, but not alarmed. If you suspect something is wrong, then report it to the police.

“I would stress that there is no specific information which suggests Scotland is at risk of attack however the UK threat level remains at Severe and our communities are not immune from the threat posed by terrorists. That’s why I would encourage people to go about their business as normal but remain vigilant.

“I am confident that the diverse, welcoming and multi-cultural communities across Scotland will work together to defeat terrorism and ensure no individual or community feels marginalised or isolated by the actions of criminals.

“Our thoughts at this time are very much with those individuals and communities affected by the events in Brussels.”