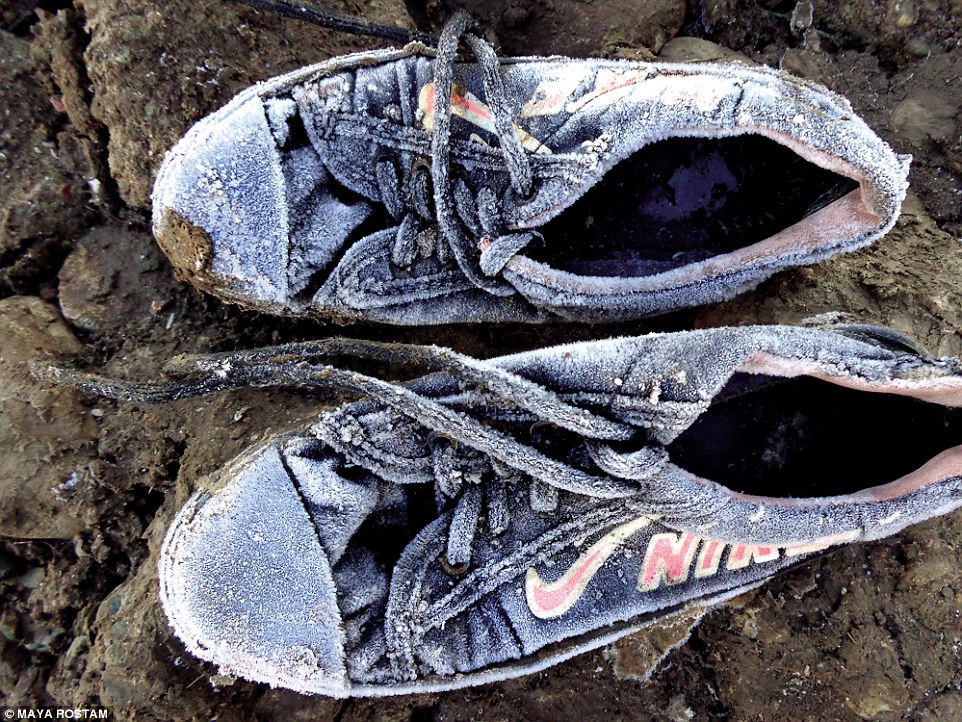 I once spent a fortnight on a narrowboat in France during the wettest October anyone could remember. It’s not easy to dry clothes on a narrowboat, and by the end of the trip I thought I was getting foot rot; how glad I was to get back to my nice dry house and my nice dry shoes. Imagine, then, having to live in mud and slush for months on end, to have to walk long distances in footwear that’s not fit for purpose – or sometimes in no footwear at all. Amongst all the other horrors and hardships they face, Syrian refugees are having to deal with this every day.

My children used to cry when their feet were cold after playing in the snow; Syrian children are enduring frostbite and exposure – and unlike our children, they can’t sit down in front of the telly with a mug of hot chocolate; they have nowhere to warm up, no clean socks to wear, no radiators to dry their clothes on. Men are walking for months in soaking wet sandals, carrying their babies across Europe to try to reach safety; even if they survive treacherous boat trips, it’s likely that any possessions they started out with will be lost overboard.

We all want to help when we see others suffer, but sometimes it’s difficult to know how to start; a new Edinburgh charity has taken the initiative and joined up with Step In My Shoes – originally a small local campaign to collect good quality shoes and take them to where they’re needed. Step In My Shoes was founded by Lorraine O’Sullivan, an Edinburgh educational psychologist who had been working with a Norwegian humanitarian group on Lesbos; today Lorraine is spearheading the project as it is rolled out nationwide. Edinburgh Cares was set up only last September, but it has already undertaken seven aid missions, to Croatia, Serbia, Hungary, Slovenia, Macedonia, Greece (Samos) and Turkey; in the last three months of 2015 it delivered over 100 tonnes of aid in conjunction with its partner agencies (which include Well Foundation, ReAct, Hand in Hand in Syria and Sawa). Edinburgh Cares is a grassroots, volunteer led organisation; 100% of its donations goes directly to help those who in need. Volunteers and donors not only arrange campaigns in the UK – many deliver the aid themselves, paying their own costs to take part in aid missions, seeing for themselves where that aid goes and how much good it does. Edinburgh Cares believes that the experience of personally distributing aid by their own hands leads to empowerment of individuals and facilitates the true spirit of charity work.

Step In My Shoes is just the kind of simple appeal that works; its volunteers go into schools, local businesses – anywhere they can – and talk about the issues facing refugees. They ask people to donate a pair of outgrown/old shoes or boots, a personal note, and perhaps also a pair of socks and £1 towards transport costs if they can; the footwear is all collected up, and volunteers take it all to where it is most needed. The first wave of the campaign has had a terrific response in Edinburgh; now it is spreading out right across the UK. Schools want to be involved (not a single Edinburgh school has refused to participate), pupils are interested in what is happening to children like them – what they see on the news is suddenly real.

And it’s not just schools – a local supermarket gave 160 pairs of boots to the campaign, The Scottish Government has asked its own staff to donate, a local garage returned a volunteer’s car with the boot stuffed full of shoes, a homeless man stopped and helped volunteers unload shoes into the warehouse (they gave him some new socks!); it’s a concept that everyone can understand and to which everyone can contribute something.

So what can you do? There are lots of ideas on the Step In My Shoes Facebook page. If you live outside Edinburgh, you might be able to approach your local council to ask if Edinburgh Cares can drive the campaign through their nursery, primary and secondary schools. In areas not yet covered by the campaign, you might approach your local school to let them know that Step In My Shoes is on its way – the campaign can help you with a pack of useful information and a contact at your local council. You might be able to collect at work, at your church, at your local youth group, or in your village or street.

If you haven’t got any spare shoes, you can donate to transport costs or give other clothing items such as scarves and hats. One of Edinburgh Cares’ greatest needs just now is help with the collection and storage of donations – they are thrilled that so many people want to give, but they need volunteers who can bring the shoes to their warehouse AND they really, really need more places to keep them. If you, your employer or your business can help with any of this, please get in touch now! Edinburgh Cares is also collecting shoes from celebrities, sportsmen and sportswomen, politicians, film/media personalities, authors etc and intends to auction these to raise money for transport, drivers and so on – if you have any contacts – or just great powers of persuasion – they’re relying on you! Some fabulous well-known people have already stepped straight out of their shoes for the campaign – can you help to build the collection? Or perhaps you just want to donate some shoes? The project is especially keen to have trainers, walking shoes, boots and anything robust and in reasonably good condition, new or outgrown. Men’s boots and trainers in sizes 43 and 44 are desperately needed.

This month Edinburgh Cares is also launching March For Syria, a campaign aiming to raise funds for Syrian orphans and awareness about the plight of all Syrian victims of war. They need volunteers to run events, manage social media, do marketing – and many other tasks; if you want to help, take a look at their website here.

For details of all events see the Edinburgh Cares Facebook page.

So don’t just sit around feeling guilty, decide how you would like to be involved and go for it – that’s what Lorraine O’Sullivan did, and just look what happened…

‘Compassion is the basis of morality’  ― Arthur Schopenhauer.