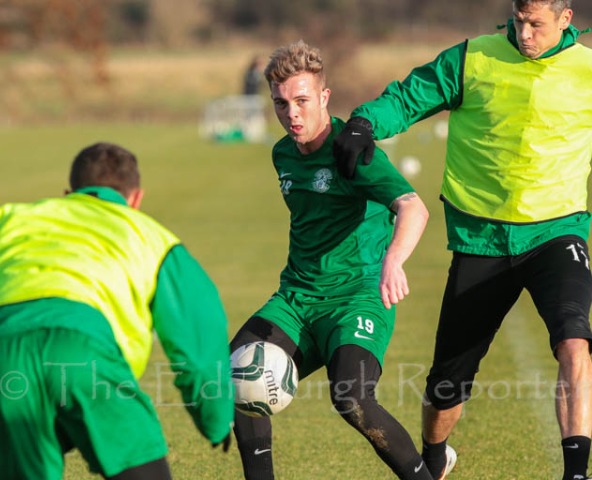 Hibs’ midfielder Danny Handling says that he is happy to be included in the squad for the last two matches and he is extremely grateful for the help and support Alan Stubbs and his team-mates afforded him during his comeback from the serious injury.

On 14 July last year, Handling went down injured in pre-season at Shielfield Park after 20 minutes and sustained a cruciate ligament injury in his knee, ruling him out for a large part of the season.

His inclusion on the substitutes bench was a surprise to the supporters attending the League Cup Final and now he is looking forward to getting back onto the starting XI as the team face an amazing nine games in April.

Speaking to Hibs TV, he said: “I’m very happy. Seven months out of the game is a long time so to be put back into the squad for a League Cup final and Scottish Cup quarter-final was a great feeling.

“I feel ready and confident in my knee. I’m training and doing everything else with the first team, I just need a few games with the youth team to get my confidence up.

“I knew at the time that it was a bad injury but I had no idea what it was until I got down the tunnel. At the time I didn’t have any idea how long I’d be out.

“I was gutted to be out of the job you love for seven months was upsetting but I came through it with the help of the staff and players.

“The boys have given me great help, a few of them have done their cruciate before so they gave me an insight into what it was going to be like. Some took longer to come back, whilst others came back quicker than me, but they all had it in common and made it easier for me.

“The gaffer trained with me most days, some days he lacked off! Some days he would come and train with me all day. The gaffer has been brilliant with me, he’s helped me and stood by me everyday. It’s been a real inspiration for me, not just him, but the players as well.

“To know that your team mates and the staff are behind you is a great feeling and it says a lot about the team and staff we have got here at Hibs. If it wasn’t for them I would not have been here today.

“I have a game with the 20s next Wednesday at Spartans but if the manager wanted me to play (for the 1st team) I’d I’d be ready to play but I need some fitness first.

“The side is strong and we have done really well this season so just to get back into the squad is an achievement.”