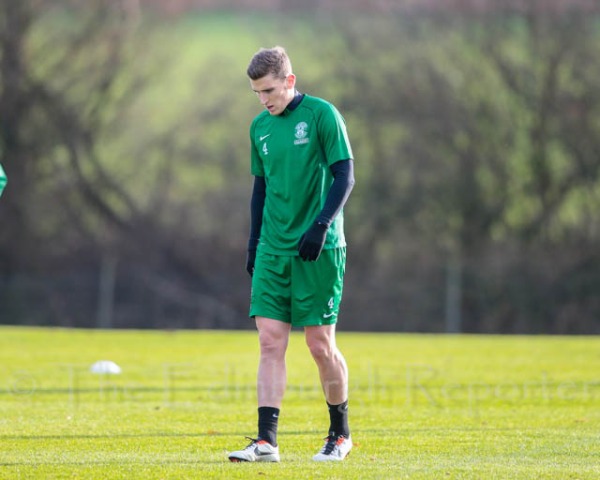 Hibs have been plagued by injuries to influential players in the past few weeks however with the international  break on the horizon, Head Coach Alan Stubbs is hopeful of seeing them in action sooner rather than later, particularly with next month’s fixture pileup on the horizon.

In fact it’s possible that Fraser Fyvie and Danny Handling may feature in the squad for tonight’s game against Raith Rovers at Starks Park although it will probably come too early for Paul Hanlon (Pictured) whom Stubbs believes will be available for the St Mirren game after the break.

Eslewhere Danny Carmichael and Dylan McGeouch are waiting on a specialist’s opinion although Stubbs is confident that there will be some good news.

Speaking to Hibs’ TV, Stubbs said:”In the coming weeks we will have Paul (Hanlon) back, Fraser (Fyvie) is very close now. We are expecting him to be available this weekend and if not he will definitely be ready for the game against St Mirren after the international break. Danny Handling is obviously back with us and is stepping up his fitness every days. Dan Carmichael: we are waiting to hear some news back from the specialist and Dylan is the same. He is due to see the specialist in London next week and we are hoping he gets some good news.

“His injury is settling down really well just now, and he seems happy with it but we are waiting on s second opinion from the specialist.”