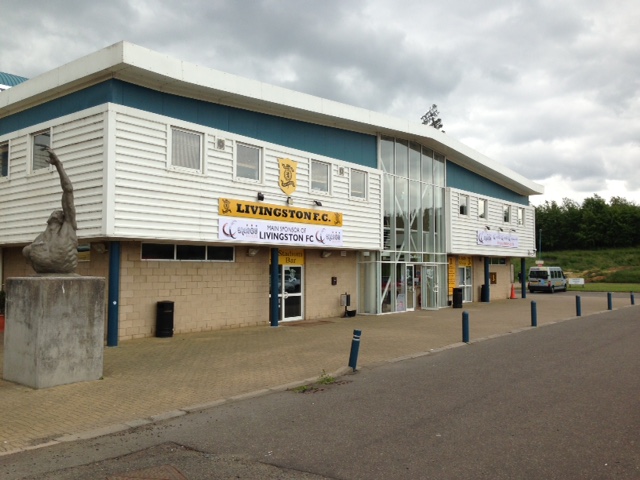 Despite dominating possession, Hibs were unable to overcome a well organised Livingston side at a snow covered Tony Macaroni Arena tonight and both clubs had to settle for a share of the points.

Head coach Alan Stubbs made one change to the starting XI that drew with Hearts last Sunday with Chris Dagnall replacing Dylan McGeouch who was forced to leave the field with an injury.

On loan midfielder Sam Stanton was not allowed to play for Livingston against his parent club.

Hibs went into the game knowing that Rangers had dropped two points against Alloa Athletic earlier in the day but it was the Lions who adapted to the difficult underfoot conditions creating two decent chances in the early stages.

Referee Alan Muir incurred the wrath of the travelling support by awarding two ‘debatable’ free kicks against Marvin Bartley as Hibs looked to take control of the game and the Easter Road side almost took the lead in the 21st minute but Dagnall was unable to control Lewis Stevenson’s cross.

Four minutes later Marc McCallum punched a Liam Henderson free kick away when it looked easier for him to catch.

Danny Mullen was lucky to escape a yellow card after a reckless challenge on Stevenson as Hibs started to dominate possession although Livingston always looked dangerous on the break.

McCallum did well to hold a long range effort from Darren McGregor then Dagnall went close with a header from a John McGinn cross.

Hibs almost went in at half time with a lead when Dagnall managed to deflect a Stevenson cross into the path of Jason Cummings but McCallum managed to smother the ball at the last minute.

Hibs went agonisingly close in the 54th minute when Paul Hanlon sent a fine cross to the back post but Gray’s powerful header was cleared off the line by Ben Gordon.

Livingston almost took the lead against the run of play in the 70th minute when Mark Oxley punched a cross into the path of Gary Glen but the keeper reacted quickly to block the former Hearts’ strikers shot. The danger wasn’t over however and the ball fell to Jordan White but his effort struck the crossbar.

Moments later Henderson was brought down at the edge of the box but his resultant free kick flew well over the bar.

Cummings had a long range effort saved before being replaced by Martin Boyle whilst James Keatings took over from Henderson as Stubbs tried one last throw of the dice.

Within seconds however Glen should have scored hen he missed a free header from 5 yards.

Both Stevenson and McGregor had long range efforts in time added on but the game ended all square, leaving Hibs eight points behind leaders Rangers with a game in hand.

After the game a disappointed Alan Stubbs told BBC Alba. “It’s one of those days when we will take a point because I didn’t think we deserved anything more than that. I didn’t think we were at the levels that we have been at recently and I have got to say that Livingston fully deserved their point out of the game. There is no point hiding anything, we had too many non performers today.

“Tiredness wasn’t an issue, we just dropped below our levels today. As you have seen with results today there are no easy games in this league. When you are not 100% at it, you give the opposition the opportunity to get a result and that is what we found today.”

Hibs now face Hearts at Easter Road on Tuesday in the Scottish Cup 5th Round replay.