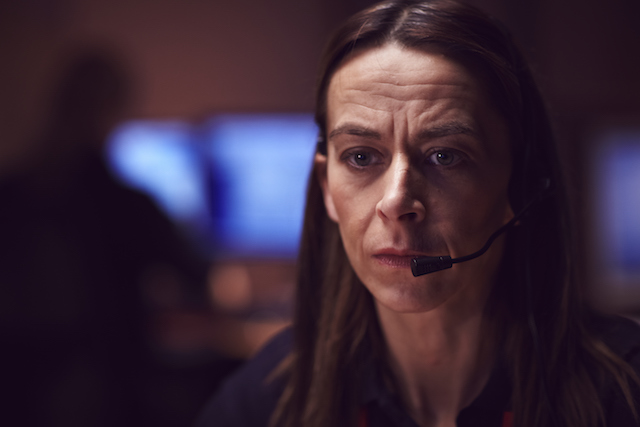 Rebecca Morgan is a young film producer from Edinburgh, and on Sunday night she was at the BAFTAS as a nominee – and her short film won!

That is to say Rebecca and her co-producer Caroline Bartleet (who also wrote the script) won the BAFTA for their film called Operator . It is a huge honour and they are both thrilled, but naturally we were only interested in Rebecca since she hails from the capital, while Caroline is from Essex.

Rebecca was brought up in Edinburgh where she volunteered at Edinburgh International Film Festival for a couple of summers, and then went on to study film at The University of Nottingham, followed by a bit of travelling and finally a leap in the dark into London. After a couple of months she began worked as a runner with a film production company and only last year she became a freelance film producer.

Caroline wrote the script in Spring 2014 and asked Rebecca to produce the film with her. Both Rebecca and Caroline love the way that films tell stories. When she agreed they decided to raise the money on Kickstarter and agreed a rough budget of around £7,000 which they managed to raise. This allowed them to employ a couple of well-respected female actors for the two main roles. The star, Kate Dickie, previously appeared in Game of Thrones and Red Road and Vicky McLure had roles in This is England and Line of Duty.

They were careful with their budget and did not use everything for production preferring to keep money aside for the post-production and submitting the film for festivals.

They also received a sum of money from the Fire Brigades Union, in view of the subject matter of the film. The operator in the Fire Control Room played by Kate Dickie deals with a 999 call. (No spoilers here!)

Getting nominated for a BAFTA, the young producers had to enter the film for one of BAFTA’s recognised film festivals. In their case it was the BFI London Film Festival which allowed them to make their application for BAFTA.

After finding out they were nominees on 8 January Rebecca went out and bought a dress without any ‘messing around’, and without involving any fancy designers.

The film is compelling, riveting viewing even thought it is under 10 minutes long. When we asked what happens with the film now, Rebecca told us that some of the bigger film festivals want to premiere films and clearly that status has now been lost, so the aim is to put Operator on line so that it becomes widely available to the public.

The Edinburgh Reporter spoke to Rebecca over Skype:

As to the filming process, Rebecca explained: “The film was made with a complete crew of around 25, and in fact the first day was devoted to setting up the lighting rig. It is hard to explain how many people and how much equipment it takes to make even a short film like this! We had, I think, five guys who came in on set up day with scaffolding poles and lights to create the mood lighting effect. You might think we just had a couple of lights, but it was a massive production!”

“The producer’s role is to find the location, find the crew, get the insurance, negotiate the contracts, make sure everyone turns up on time and that everything goes smoothly. You also have to control the budget and then there are the festival submissions.

“The producer has the most control, but also the most responsibility.

“The great thing about a BAFTA is that the funding next time around might be easier. Caroline and I are hoping to do another short film this year, perhaps together and perhaps not; it depends on what happens.” At the BAFTAS the pair were sitting alongside all their fellow nominees in the same row. But they did not know what order the awards were being announced in so it all happened quite suddenly.

Rebecca told us that they partied alongside the other nominees on Sunday evening: “We still can’t believe it. The whole of Sunday and Monday was a real blur!”

PS Rebecca also has a famous mum: Nicola Morgan who writes all those fabulous books for young adults.