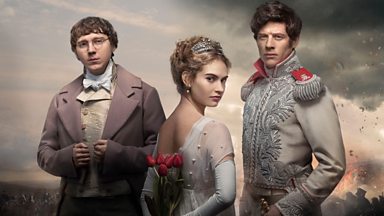 by Philip Bullock, University of Oxford

Much of the recent commentary about the BBC’s new adaptation of Leo Tolstoy’s War and Peace has focused on the “sexing-up” of the original story line by its director, Andrew Davies. Even before the first episode aired on January 3 2016, the British press was outraged at the portrayal of an incestuous relationship between Anatole Kuragin and his sister, Hélène.

“It’s Phwoar and Peace”, hollered the Daily Mail, adding: “new series of War And Peace has left scholars up in arms over ‘ripe’ scenes that go beyond scenes in the book”.

This presumption that this detail was invented to titillate contemporary audiences is a revealing one because it’s false; if there is any “sexing-up” in War and Peace, it is Tolstoy who is responsible. WARNING: LITERARY SPOILERS AHEAD.

Rumour surrounds Hélène and Anatole wherever they go. And towards the end of the novel, Hélène dies after treatment for a heart condition, which may in fact be an abortion.

Even in his lifetime, Tolstoy was a controversial figure, never afraid of telling the truth as he saw it. War and Peace abounds in scenes that can still shock today. Tolstoy’s description of the corpse of Prince Andrey’s wife, Lise, who dies giving birth to their child, is touching and terrifying in equal measure. Anna Karenina is little different. Its accounts of childbirth, breastfeeding and birth control (the latter detail nicely caught in Joe Wright’s 2012 film version) are uncommonly frank for a 19th-century novel, even if these are all delivered with a good dose of male voyeurism that some modern readers find unsettling.

Sex and death are never far apart in Tolstoy. Kitty’s examination by a series of doctors when she falls ill after being rejected by Vronsky chillingly foreshadows the depiction of Anna’s mutilated corpse at the end of the novel. Little wonder that Tolstoy was described by the symbolist novelist and thinker, Dmitry Merezhkovsky, as “the seer of the flesh” – as opposed to that great “seer of the spirit”, Fyodor Dostoevsky.

Writing for the fourth wall

A better way of looking at things may be to see the TV adaption as one of tone, rather than content. The camera makes things explicit, where a novelist can rely on readers to interpret covert hints. And Tolstoy’s audience was well able to read between the lines. Censorship was an established feature of Russian literature at the time, even if it had been relaxed under the more tolerant rule of Tsar Alexander II from 1855. Writers were adept at using inference and implication to make their points – and readers were well used to analogy and allegory as literary devices.

Perhaps the most innovative feature of War and Peace was not so much its treatment of sex, as its handling of history. When Tolstoy first began work on what would become War and Peace, he planned to write a novel about the Decembrist uprising of 1825, when a group of reformist Russian nobles and military officers protested against the accession of Nicholas I.

The suppression of the rebellion – which sought to replace Russia’s autocratic system with something more liberal and democratic – was brutal. Its ringleaders were either hanged or exiled to Siberia. Yet, as he worked, Tolstoy realised that to discuss the uprising, he needed to go back to the Napoleonic wars in the early 19th century, when the ideas of the Decembrists were first formed. In this, he was helped by the growing number of memoirs that were published in the 1860s. Yet despite Alexander II’s reforms, there was still much that could not be mentioned directly; reading between the lines remained a necessary practice.

Tolstoy underwent a deep spiritual crisis after he completed War and Peace and Anna Karenina. Rejecting his great novels, and indeed all art, as immoral, he tried to find solace in religion and the simple life. Yet peace eluded him and his works of this later period explore all the themes of his earlier works in even more extreme form.

The Kreutzer Sonata is the story of a man who murders his wife because he fears she has been unfaithful, but its most scandalous feature is Tolstoy’s conviction that even sexual relations within marriage are immoral and that the human race should give itself up to celibacy. His fearlessness made him a hero to many, but he was excommunicated by the Orthodox Church in 1901 for his unconventional religious beliefs.

It is often felt that there are two Tolstoys; a novelist of genius and a tawdry moral prophet with a messy personal life. In fact, there is hardly a distinction to be made between these two extremes. Everything that characterised the life of the late Tolstoy is there in the earlier novels and we do War and Peace a great injustice if we try to smooth over the seething moral indignation that underlies Tolstoy’s depiction of characters such as Hélène in whom beauty and corruption are fatally entwined. “Sexing-up” War and Peace may be one way to teach us to read Tolstoy again – but this time perhaps more carefully.

Philip Bullock, Professor of Russian Literature and Music, Fellow of Wadham College and Lecturer at Worcester College, University of Oxford