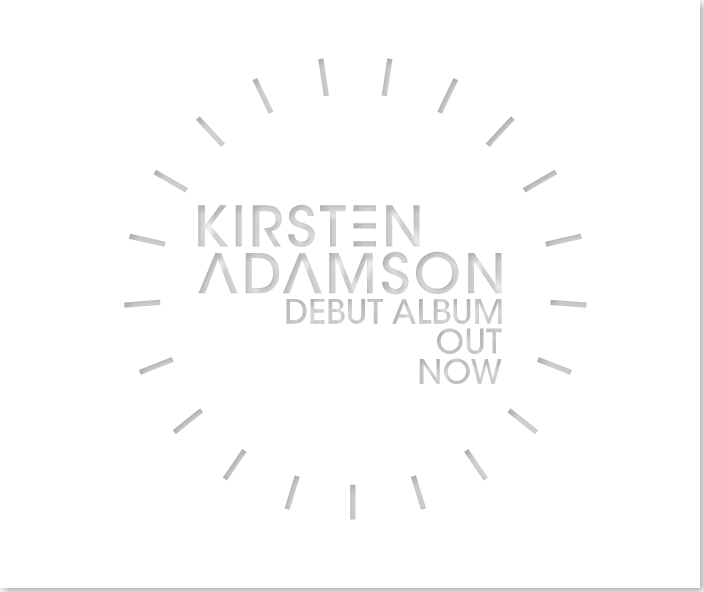 When I decided to review this new album from Kirsten Adamson, (daughter of Scotland’s much missed legend, Stuart Adamson, founder member of the Skids and a true Rock Star in his own right) I really had no idea what to expect.

(Read to the end for news of a special live appearance by Kirsten in Edinburgh on 30 January!)

Now I’d met Kirsten on many occasions buying new strings and blagging shots of guitars that I really couldn’t afford, (but really fancied a shot of) as a very busy member (partner) of Red Dog Music, in the Grassmarket, here in Edinburgh.

I’d heard her perform an age ago at a small stage again here in Edinburgh, but either the sound was poor or I wasn’t paying enough attention, because I just couldn’t remember what she was capable of.

So the CD was played with a genuine anticipation and a genuine open mind.

And I couldn’t believe what I heard, I really couldn’t. I do get quite nervous when asked to listen to a new singer-song writer, earnest new work, because generally it can be hard. Hard to listen to and hard to say much positive about…….

But on this occasion…………

From the first pulsing beats of the first track: ‘Like This’ to the last track’s dance-inspired, ‘Big Red Bus’, I was happily surprised, no I really was.

Now, as far as I can find in my research this is Kirsten’s first album but there’s no sense of nervousness or the way too obvious ‘nods’ to their heroes.

No, here was just a great album that, yes, full of Tori Amos vocals and yes, sounds that Kate Bush should take a small pat on the back for, but Kirsten has taken this group of quirky, personally inspired songs polished them up and made them her own.

No its starts with the dark, pulsing and ominous ‘Like This’, bursts into the great pop song that is ‘New York Girl’ and just keeps on going, producing great pop, dance inspired, but truly played brilliantly by a group of great musicians. Phil Hopwood’s dashing guitar always complementing the keys and programming of David Jamieson. A driving bass that sits beautifully, yes I said beautifully with Ru Stewarts drums and percussion.

‘Valentine’, what a great rock song, where Kirsten’s influences fall away and her vocals take centre stage to some pure raunch. Love its attitude. In fact, there’s nothing not to love about this album. Oh yes, go on and try and not get lost in ‘Mountains’, another hurting song where Kirsten is herself and lovely for it.

So there you have it. This debut is a beautifully put together, inspired piece of heartfelt songs that will really make you listen.

If you would like to hear Kirsten Adamson play songs from her new album then get yourselves along to Elvis Shakespeare tomorrow 30 January 2016 at 14:00pm. More details here.