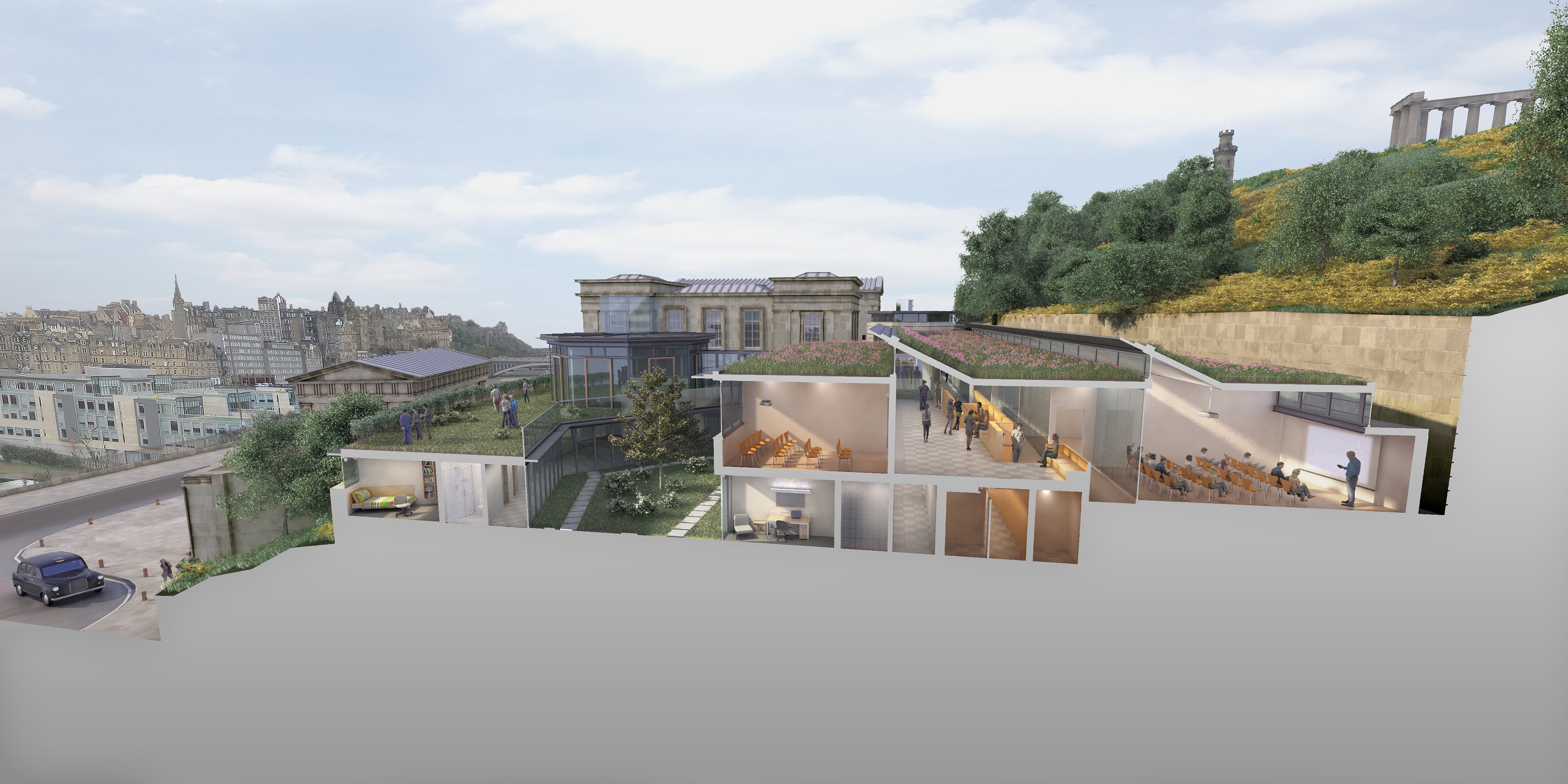 The decision by the council on plans to form a five star hotel in the former Royal High School building will be made tomorrow Thursday 17 December. The application has been subject to criticism and acclaim in equal measure, and the council officers are recommending the plans are refused but something has to be done with the building which has lain empty since the 1960s. A whole day has been set aside for deliberation of the planning application, and the planning committee could still overturn the officers’ advice and approve the hotel scheme.

The Trust, which hopes to move St Mary’s Music School into the historic Thomas Hamilton building on Calton Hill, has now submitted its detailed planning application to the City of Edinburgh Council.

Central to the proposals, fully funded by the philanthropic Dunard Fund, is the creation of three new public performance spaces, including a 300-seat concert hall in the former debating chamber – thus providing the music school the opportunity to build its unique status nationally and internationally, while allowing many more people access to this unique piece of Scotland’s heritage. A new, grand, but highly contemporary foyer will be created beneath the concert hall for ticketing, bar and cloakrooms. When not in use by the public, this can also serve as a multi-function space for the school, avoiding the need to constantly re-configure the main hall.

Stairways or lifts on either side of the foyer will rise beneath original cupola to the fully restored main hall, which will feature flanking stairs as per Thomas Hamilton’s original designs. The concert hall, itself, will be fitted with the very latest hydraulic seating to achieve a range of configurations for full orchestral performances through to more intimate recitals.

A new public entrance, grand terraces and the addition of new and near invisible school buildings to the east and north protect both the integrity and setting of the Hamilton masterpiece. “The Trust believes that the former Royal High School should return to its rightful position at the cultural heart of Edinburgh and we are simply delighted with the designs prepared by Richard Murphy Architects. These not only give us three new public performance spaces and a state-of-the-art new home for St Mary’s Music School but they also ensure that the building’s dramatic setting is both protected and enhanced.

“Our plans are focused on both preserving this exceptional building while bringing forward progressive, innovative designs to give it a modern and sustainable use.”

He added: “We fully recognise that the City of Edinburgh Council is not currently in a position to accept our offer due to its existing commitment to a commercial development. However, we have consulted widely and believe that our plans satisfy the need for conservation, public access, a culturally suitable and economically sustainable use. Therefore, if the commercial application were refused, the Trust is poised and ready to enter any new competitive process to acquire the building for St Mary’s Music School. Such a process could be completed in a matter of months.”

Dr Kenneth Taylor, Headteacher of St Mary’s Music School, said: “This is an exciting and wonderful opportunity to further develop St Mary’s Music School with its unique position as Scotland’s only independent specialist music school. Moving to the former Royal High School building would provide us with the performance and rehearsal space we aspire to and would enable us to broaden and extend the outreach activities we currently offer to the wider community.

“The new site will allow for future expansion and a high-profile location will make the school more visible in Scotland, the UK and internationally. It will provide a concert hall of historic importance for the school, external concerts and as a potential venue in the Edinburgh International Festival.

“We are conscious that this will only succeed if the local authority opts to reject planning approval for an alternative commercial proposal for the site.  We are confident that the RHSPT’s proposal provides a far closer match with the architectural and cultural significance of the unique site and are hopeful that councillors will agree.”