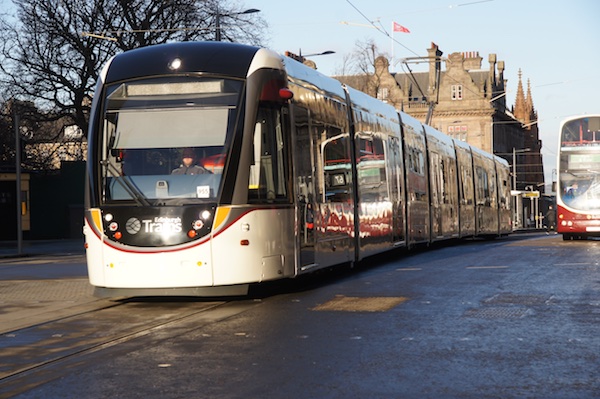 It has been reported this morning that Edinburgh Trams carried over 5 million passengers last year surpassing all predictions.

The number of people using the tram has gone up by 12% on last year and Edinburgh Trams say that all the predictions used in their business models were lower than actual figures.

The tram service launched in May 2014 and is making more income than predicted at the time.

Councillor Lesley Hinds, Chair of Transport for Edinburgh, said: “These latest figures demonstrate the continuing popularity of Edinburgh Trams and add to the success of our first year of operations, which saw almost five million passengers ride the trams. We now want to build on this success for the future of the service, as we look to extend and develop the network to provide for even more people in Edinburgh.”

Ian Craig, Chief Executive of Transport for Edinburgh, said: “Edinburgh Trams continues to go from strength to strength and this is because of a huge effort from the team over the past two years. Our first year of operations was a big success and a time of much excitement but the real test is sustainability and continuing high quality operations.

“The service we’re delivering is great, it’s highly reliable and, as a result, we’re seeing more passengers get on board than last year. Edinburgh Trams is getting more popular and we want to make sure that trend continues for the benefit of the city.”

More passengers now use the Park and Ride at Ingliston where numbers have gone up by 60% on last year. This is the preferred route of choice for those coming into the city from the west.

During the busiest week of all for Edinburgh Trams over 137,000 used the tram during the Festival in 2014. Events at Murrayfield have benefitted from the convenient tram stop and attracted over 10,000 more passengers there during rugby matches and the Foo Fighters concert.

Earlier in 2015 Edinburgh Trams received a 95% overall customer satisfaction rating following an independent UK wide survey by Passenger Focus whist operated with 99% service reliability. This means that reliability and satisfaction levels are among the top performing public transport operators in the UK. Further success came in October when Edinburgh Trams secured Edinburgh Trams the Operator of the Year award at the 2015 Light Rail Awards following a successful first sixteen months of service. Edinburgh Trams was also shortlisted at both the Scottish and UK Transport awards.

The tram team carried out a successful six week ‘red-eye’ trial to service earlier departures from Edinburgh Airport.  More than 1200 additional passenger journeys were recorded. A trial of mobility scooters has been prepared and will take place from early 2016.

There were approximately 4.92 million passenger journeys on Edinburgh Trams during its first year of operations to May 31 2015, around 370,000 ahead of target set before launch. Launched on Saturday 31 May 2014 at 5am, Edinburgh Trams also surpassed revenue targets set out in its business model by around 3%. Concessionary card holders accounted for 10.9% of passengers which is well within the Councils budget which was set to ensure that Edinburgh’s card holders get free travel on the tram.

Full financial details for 2015 will be published through the annual reporting process.