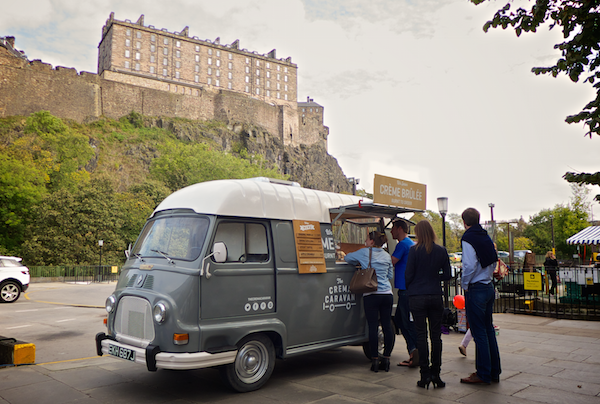 Hooray! The two Scots behind Crema Caravan have just told us they won Best Dessert at British Street Food awards with their crème brûlée on wheels.

Borders based Cal & Mel along with their van ‘Florence’ made the trip to the O2 Arena, London for the annual awards.

“An accolade like this is the icing on the cake for us after just over a year trading. From sell-outs to wash-outs it’s been an unbelievable year!” said Mel of their win.

The awards, the brainchild of food journalist Richard Johnson, recognise the top mobile food vans in the Uk and the emphasis is on food created that’s as good as found in top restaurants.

“It’s difficult to do sweet on the street. but the judges were impressed at how crema caravan manage to do it — with a real dash of theatre, a lot of hard graft, and exquisite toppings, all prepared with a real cheffy flourish” said Richard Johnson of the duo.

The Best Dessert winners are looking forward to a busy 2016 with their calendar already filling up after their success in London.

The couple began their Street Food Adventure after seeing what was happening in the States a few years back. Re-settling in Scotland after several years travelling, the couple decided the time was right for a street food venture.

Crème brûlée was originally going to be the dessert option to complement something savoury but they saw a niche and decided to start the UK’s first crème brûlée van. It all clicked into place when they spotted a vintage Renault van whilst working in France. They bought Florence in May 2014 and The Crema Caravan was born!

The Crema Caravan uses locally sourced produce and adds a bit of theatre by torching every crème brûlée to order.

The Crema Caravan are usually to be found at events and markets across Scotland.
Next stop for their award winning desserts is new market ‘The Pitt’ in Edinburgh tomorrow Saturday 12th December.